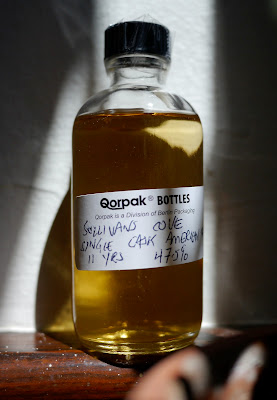 Tasting notes:
Eleven years old seems a bit young for a tree to be chopped down and turned into a barrel, so I find myself confused by the Sullivan’s Cove Single Cask American Oak, 11 years. How did they get so much flavor out of a sapling? [Stephen: Bill! The whisky was AGED in an oak barrel for 11 years!] Oh, well, if I may digress briefly, I’m used to not getting much respect from Stephen and John, or for that matter, anyone at the single (malt) bar, either. I don’t know, but I wonder if the Sullivan Cove dram, being after all, a TASMANIAN whisky, doesn’t get much respect either (except, like me, from sailors). Anyways, on the nose, banana bread in banana leaves, cough syrup without menthol for kids. An orange daiquiri with a litmus umbrella on a green bamboo toothpick. (Guess what color the litmus paper is!) On the mouth, a grilled slice of orange served on a planked salmon by a Koala bear, who has an angry thought-bubble: I am a marsupial, not a bear! Roundness of orange juice luxuriating in a walnut oil pool with bananas carved to look like lotus blossoms. Orange concentrate, jiggly and higgledy-piggledy after generous infusions of Adderall and ginger-toffee roast espresso beans in a Nuevo Mexicano fusion cuisine quesadilla. A Caesar queso-tini!! And then, on the astonishingly long and lovely finish, advice from Lucille to B. B. King: If this tongue’s a-hummin’, don’t bother strummin’. [John: Bill! “Lucille” is his guitar, not a real person!] Oops. Anyways, fermented Bermuda grass, marketed as kimchi, gracing the top of banana cream pie tricked out with mandarin oranges and polar bears dancing with swans on ice floes.

Rating:
–On the scale of wolves in sheeps’ clothing, er *ahem*, fops in cops’ clothing, er *ahem*, things you think will be one thing but then are something else–
The Sullivan’s Cove Single Cask American Oak, 11 years, is The Artist–A (mostly) silent black-and-white movie winning the Oscar™ award for Best Picture of 2011? It’s incroyable! It’s a Coney Island of the Mind! It’s insanely drinkable! It’s a pair of exclamation points followed by a question mark!!? It’s unfortunate that my sample is gone.

–Our thanks to Raj and the good people at Purple Valley Imports for the sample!