[This is one of many shorter reviews we’re posting on current Scotch Malt Whisky Society offerings (rocking Lo-Mob photographic effects on the pics).  Check out the beginning of this other post for more on what we’re up to here.  If you want to find out more about the SMWS or their bottlings, you should visit www.smws.com] 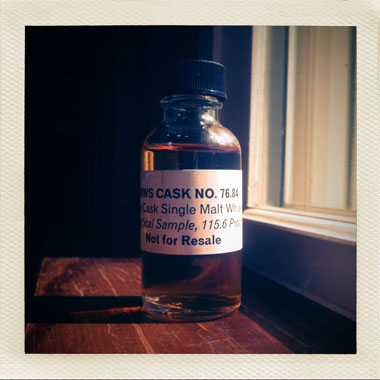 Tasting notes:
The SMWS 76.84 makes me burst into song, “Sherry… Sherry baby, Sherry ba-aa-bee: Sherry baby!” Stephen would call this a ‘sherry bomb,’ but I thought those were outlawed in 47 states. On the nose, hiding behind the sherry is melting butter in a mahogany chalice, lambswool, swampblossoms, poppy plants, and grilled eggplant dredged in cornstarch, olive oil, and rosemary. Lemon-scented pine toothpicks dipped in amber dust, and it’s like being trapped by one of Merlin’s spells in a prism for two years and LOVING IT. On the mouth, understated like a spy in dinner clothes, blending in, but armed and dangerous. Suddenly: prunes! Stewed in nectar! The finish is like focusing a telescope on a blurry blip and having it resolve into a hither-to undiscovered supernova in the constellation Virgo, upon which I use my naming rights to call Omniscient Orotund Oloroso of Oz. Also, a bit of burnt mesquite emerging from a pool of savoury sesame oil. As usual, I wept at the prospect of adding water, but perservered hoping against hope that my butterfly would evolve into super-butterfly rather than a very hungry caterpillar.
The nose opens into a floral shop, redolent with ferns, lilacs, water lilies, and frozen raspberry custard. Corps of ballerinas stepdancing in suede shoes on a freshly finished maple paraquet floor waxed with lemon oil-scented sterno in Bill Gates’ faithful reproduction of a French chateau. Honeycomb mouth—minus the honeybees—and clementine rinds. The finish is body-surfing on coconut oil and roasted hazelnuts at Saint-Tropez, which I’ve totally done. Not. Water changes it, and the butterfly neither reverts to a caterpillar nor metamorphoses to a super-butterfly. It’s like trying sushi for the first time: You don’t know if you like it, you don’t that you don’t, and it makes you wonder. Then, the addiction begins.


Rating:
–On the scale of lesser-known Scottish knights in the King Arthur cycle–
The SMWS 76.84 is Sir Mort of the Loch–Known for harrowing his enemies and feasting with his friends. His sword is as keen as the glint of light in his eye, and both Chuck Norris and Samuel Motherf***ing Jackson would kneel before him. Spectacular.
–Bill