[This is one of many shorter reviews we’re posting on current Scotch Malt Whisky Society offerings (and we’re keepin’ it real with some Lo-Mob photographic effects).  More details at the beginning of this other post.  If you want to find out more about the SMWS or their bottlings, you should visit www.smws.com] 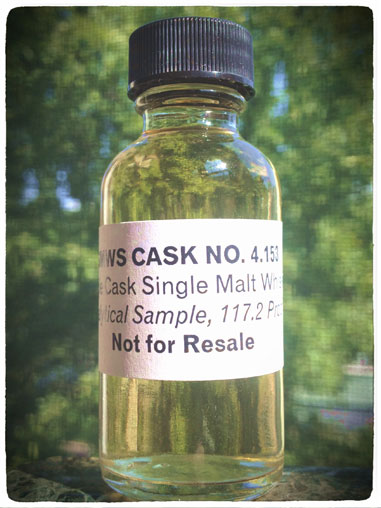 Tasting notes:
Nosing the SMWS 4.153 is like plunging my face into a cast-iron cauldron filled with pumpkin pie laced with cardamom, heather sprigs, oak shavings, jester velvet, and titanium hemostats put to questionable uses by non-medical personnel. Also: tandoori lambchops, don’t ask me to explain it! On the mouth, it’s a gritty noir reimagining of The Sound of Music. Sherry, edelweiss, singing nuns, adorkable children (has ‘adorkable’ jumped the shark yet?), Nazis, and true-life heroes. This is a historical romance to get lost in, because the signposts (written in German, duh) are mounted on cedar poles oozing pine resin, don’t ask me to explain that, either. The 117.2 proof finish has my soft palate first moaning for mercy, and then whispering for more. Shades of 50 Shades.
Adding water allows a wood-burning stove with a few burnt-out cinders duking it out with aloe vera and other succulents. The mouth is transformed into Memento rebooted as light-hearted Broadway musical—with music by Leonard Cohen?—starring Jim Carrey as a relentlessly forgetful husband. “Today’s our anniversary??? Doh!” But like all great comics, Jim Carrey has a dark side, and the mouth doesn’t let me forget the pain of childbirth, even though it’s complemented by the wonderful smell of newborn children. The finish transports my spirit to an astral plane, so it’s hard to find words used by mere mortals to describe the experience. Since I’m forced: it goes on and on, filled with odd beauty like a film by Terence Malick.

Rating:
–On the scale of “4”s–
The SMWS 4.153 is a tie between “Four score and seven years ago,” and “For a good time, call the Scotch Malt Whisky Society.”–Forewarned is fore-armed, and we’d all like to have four arms, wouldn’t we?
–Bill