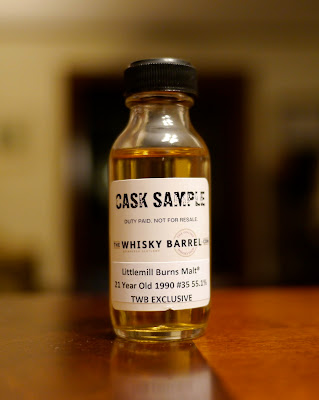 Tasting notes:
This dram begins with an exotic nose of green tomatoes sautéed in melted vanilla ice cream and de-esterized oil pressed from overripe bananas. [John: Bill! You can’t take the esters out of the oil!]  Spacklings of crushed ants encased in caramelized caramel. [Stephen: Bill! “caramelized caramel”???]  Ah, a wee timorous drammie for me pleasure, and a 21 year auld lang-legged syne of heaven, too. (Was that a bit forced? Nothing to see here: move along, move along.)
On the mouth, crushed candy cane bits mixed with dehydrated butterscotch, Tang™, dental powder, and a liquid extracted from corn that is NEITHER high fructose syrup NOR ethanol.  [Stephen:  Water?!?]  Dry and tannic like a young Bordeaux, hot and spicy like an acerbic Creole coot yelling at young whippersnappers to keep off his bayou. The effect is to spiralize my tongue like fishercat scat; that is, to corkscrew it into my soft palate. Water brings out an herbal poultice mixed by a Voodoo Mamma “for relief of sinus pressure and multiple personalities.” There’s sage, a hint of curry, dried mace, and majoram pulverized in a mortar and pestle.
The light finish makes it highly sessionable, not highly questionable, and we feared that were it available in quantity, it would be drunk in quantity, and we’d be an unknown quantity of drunks.

If no one were to show up to the protest, that would make it a PETAflop. Yes Stephen, yes John: a computer science joke. Plus ferrets. [John: #PETAflopJOKEfail]

…And “gardenias on the nose,” sez Stephen, a wee bit late on the draw.