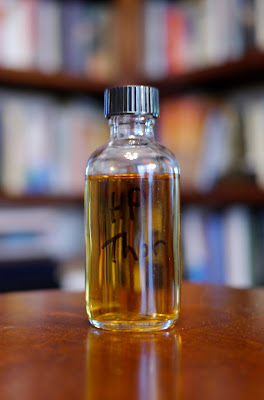 Tasting notes:
On the nose, this dram presents with clear notes of burning violin bow, but not just any burning violin bow:  this is the smell of Niccolò Paganini playing his way through–literally–a Stradivarius.  And he’s playing inside a shell–an oyster shell–against the Charlie Daniels Band.  And Charlie Daniels brought caramel apples.
As one would expect from a dram named after a Nordic deity, this dram is salty on the mouth and takes a torch to my canker sores.  But then the drying effect takes over:  soon, it’s penetrating my tongue and threatening to change my DNA into a caramel with a wintergreen mint center.  The mouth blithely elides the oiliness one expects to be there and replaces it with a Swiss cough drop wrapped in cellophane that a two year-old finds in the bottom of his mother’s leather purse.  The finish is really delicious, but quickly opens up to offer notes of cigarette butts ground out next to a bench in Central Park on a glorious spring morning populated by numerous spandex-arrayed runners.
Add a little water, and it gets tamer and more approachable:  imagine a Norse god with a Supercuts® haircut and a new bottle of Aramis© cologne.  And a mouthful of cherry LifeSavers™.  With water, the finish was a pleasant 18 kilometre run down a 1% grade ski slope with that same freshened-up superhuman Scandinavian and the bevy of Ski Betties he’d attract.  But only if you and your hammerin’ homie were wearing velour track suits.

Rating:
–On the scale of cool gods from AD&D’s Deities and Demigods Cyclopedia—
The Highland Park Thor is Garl Glittergold–though he is the patron deity of gnomes, is the god of Luck and Trickery, and has sparkling gemstones for eyes, his name is freakin’ Garl Glittergold.  If that’s not badass, then I don’t know what is.  And yes, I still have my first edition hardbound (and well worn) copy of Deities and Demigods.  Shut up.

*–Our thanks to Stephanie Ridgway and the great people at Highland Park for the sample!