[Important editor’s note:  The Glenrothes Robur Reserve is a travel-only expression, and one we discussed before with Anchor Distilling President David King (here).  Also, Bill kinda got away from us on this one.  Our apologies in advance.] 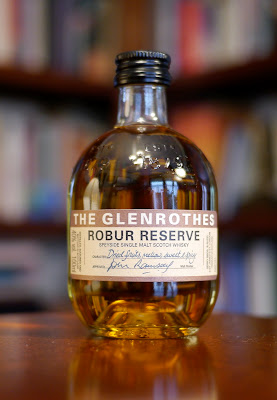 Tasting notes:
I’d like to begin with a disquistion on what it means to drink a number of whiskies, and then another one. Besides, that is, getting schnoozled. Before we cracked the Glenrothes Robur Reserve (GRR), we indulged in the imbibing of a flight of [redacted] whiskies, which were extraordinary. There was fear that the GRR would suffer in comparison, or worse, that John and Stephen’s manic giddiness would incur a Malt Gone Wild posting ……. —[Stephen: I just cut approximately 7,000 words from Bill’s bilious blatherings here.  And you’re welcome.]— ……. and so, to finish up, someone speculated that moving from the [redacted] flight to the GRR would be like moving through Heathrow from a British Air First Class cabin to the steerage of an unheated Aeroflot cargo flight that is forced to land early, necessitating the pilot to ask all the passengers for vodka to put into the “fuel tank.” To this premature extrapolation I offer below a dissenting opinion.
The nose of the Robur Reserve is redolent with retsina, pine resin, crushed almonds, and brittle. It’s like falling down a Candyland™ chute into a vat of butterscotch! Certain nameless impostors (cough, cough: Jorn and Shtephen) found an astringent men’s body wash used by boys, applied with a synthetic falafel loofah. Wafts of a shaved [maltgonewild.com]{this little bit of censoring brought to you by our Adult Only site, Malt Gone Wild} —oops, that one was mine. I also found woodiness; rich wonderful maple wood lining a closet that doesn’t repel moths, but does attract Baptists.
On the mouth, a supercommittee of subcommittees formed into a relegation delegation speaking unequivocally univocally (though not militating for sanctions nor secessions nor successions).  [John and Stephen: WTF?]  That is to say, there’s a whole lot going on, from the Coriolis effect going down my gullet, to the whirligig of lemon rinds, to Usain Bolt’s spiked track shoes, to more butterscotch. And the finish is nothing if not meth-addled hamsters ringing (and ringing and ringing) the opening bell at the New York Stock Exchange, and then being dumped in a vat of port, from which they formed no undue Pavlovian associations.
Adding water, the nose opens like a rubber balloon, expanding inside my sinus cavities, depositing gypsum chalk like a river leaving silt in a delta in a sun-drenched 2nd growth redwood forest. [Stephen: Bill! There are no deltas in redwood forests.] [Bill: Stephen! Whose review is this anyways???]  A creamy mouth-feel and a Klimt [maltgonewild.com] clamp—oops, that was mine, again. Diced Mandarin orange sections sautéed in Oloroso sherry (from a solera tended to solely by expatriate Himalayans).

Rating:
–On the scale of world airport codes–
The Glenrothes Robur Reserve (GRR) Travel-Only is The Grand Rapids Gerald R. Ford International Airport (GRR)–What, you would have preferred the French Revolution’s architect of the Terror, Maximilien de Robur-spierre? The Beatles’ song “Dr. Robur-ts”? The Mars Robur? Look, Gerald R. Ford was an Eagle Scout, a two-way starter on an undefeated college national championship football team, and a guy who hit a hole-in-one at a Pro-Am.  Oh, and he was President of the United States, too.  I’d name an airport after him!


Our thanks to Danielle Katz, David King and Glenrothes for the sample!