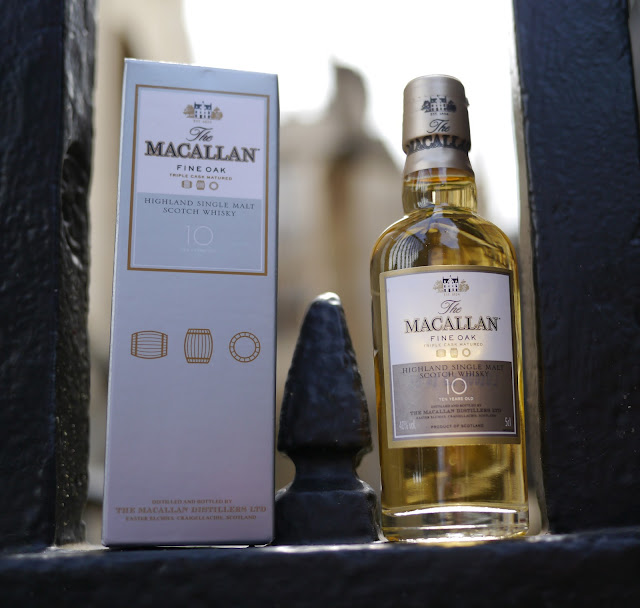 Tasting notes:
The “The Macallan 10 Fine Oak” begins with two questions: First, in the preceding sentence, since the “The” is already there, is the ‘The’ in front of the other “The” gratuitous?  [Stephen:  Yes.]  Second, since the label essentially promises that the cask wasn’t previously filled with sherry, why am I getting so much sherry on the nose? Ghosts of departed quantities?
After the sherry that shouldn’t be there—like the ‘The’ in front of the “The”—a round soft nose, but with a lurking menace behind it, sort of like a YouTube mash-up of Pete Postlethwaite and Rudolph, the Red-nosed Reindeer. Star fruit, crenshaw melons, maraschino cherries marinated in a honey suspension of snap dragons and narcissus. Dried apricots. And vanilla—of course.
Smooth in the mouth, with fresh apricots. Instead of sherry casks, did The The Macallan use a hogshead previously employed to transport apricots?  [John:  No.]  Peppercorns wrapped in raisins bespeckling a five-year aged Gouda (with a touch of salt), but without the cloying funk. An avocado-pit ball-gag from the fine oak nightstand of an eco-dominatrix who doesn’t think PETA is sufficiently serious about sustainability. Sorghum pancakes made with wheatberries ground by a marble mortar and pestle and elephant cerumen melted onto a paper plate by the sheer force of John’s personality.
Finishing with candy cane crooks wielded by jelly belly shepherds in fields of phlox. Steadfast intransgience yields to mounting self-referentiality, devolving through whimsicality to the essence of tenderness.

Rating:
–On the scale of things that are thought to be there, but aren’t–
The The Macallan 10 Fine Oak is a black hole–Enormous gravitational attraction, no actual physical space occupied in our universe. It’s possible that black holes are portals through time, space or dimensions. The The Macallan 10 is a portal to Planet Eudaimonia, and the event horizon is always receding.