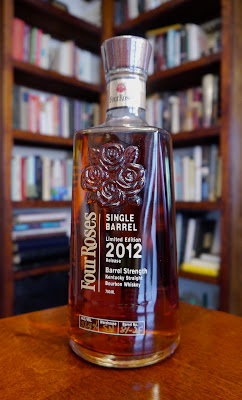 Tasting notes:
Who-WEE!  This is bourbon!  This is the kind of bourbon that will get you out of bed early—and if you’re not careful, put you right back there before lunch.  If it were an India Pale Ale, it would be an Imperial IPA of hop-tastic cunning and stupefying deliciousness.  If it were a dictionary, this baby would be the OED.  If it were a member of the weasel family, that’s right, I’m looking at you, Mr. Fisher Cat!  Run on, now, back into woods.  Please?
But as a bourbon?  Let’s put it this way:  If it shushed you at Church, you wouldn’t talk again until Wednesday.  There is so much vanilla on the nose I’m reminded of my Cousin Sarah’s Brown Cows.  Two scoops of Breyer’s vanilla ice cream in a tall glass, then Coca Cola (pronounced “Co’cola” in her coastal North Carolina drawl) filled to the foamy top.  So delicious.  So refreshing.  And that’s the Four Roses Single Barrel in a nutshell.  Refreshing to the point of invigorating, like a really great bar of soap in an outdoor shower.  Now hold your horses, I’m not calling this whiskey soapy.  Just work with me for a minute.  You’re in an outdoor shower stall, unfinished cedar walls on all sides but open to the sky above and below the shins.  A couple of Daddy Longlegs are your only company.  The low crash of waves can be heard over the water shooshing out of the shower head, and both of the sounds mask the creak the door makes when the love of your life walks in to get your back.  Sure, this scares the hell out of for a second (did you not see the ABV on this bourbon?), but quickly enough you’re ready and offer your shoulder for some scrubbing.
Though I’d rather not leave this image behind, my duty bids me to forge ahead [Stephen:  Yeah, John, “duty”; that and the State of Iowa v. Malt Gone Wild.  Remember that?  Two malts, one Glencairn Cup was your idea!  Jeez!]  The legs on this whiskey just hang there like they’re sitting in a hammock chair on a screened-in porch.  The vanilla and caramelly nose gives way to greater complexities.  A maple wood-cured venison cutlet in a foil pack with parsnips and bicycle inner tubes.  Dark chocolate orange candies.  Oh, and a few of those banded hard candies that look like little pastel Saturns and taste like sweet tarts, the kind you find for 25 cents in the vending machines near the cash register at the Piggly Wiggly.  There’s the taste of an acquisitive child’s handful of red hots, but without the red and a really different kind of hot.  Sure, there’s cinnamon, but I’m thinking of the caramelized overflow from a cherry pie landing on the baking sheet, a pulsing magma of sweet and savory that you’d risk second-degree burns to have all to yourself.  This feeling envelops you like a ridiculously large water balloon that hits you in the face and bends, bends, bends, before SNAP exploding all over you.  What you thought was a sniper round is a bomb of flavor that radiates through you.  Adding some of that water balloon water tames the expression, but only slightly.  Imagine opening the door of a boudoir with game-used ash baseball bats inside.  The water gives something new to the finish, too: a slow upsurge, like an economic recovery so slight that it requires an exotic metric (and a lot of election year spin) to detect.  Lastly, there’s pear in there, a brine-soaked sponge, and a pink flip-flop, size two, dusted in beach sand.  In short, it’s just candy.  To understand its delights, imagine nonagenarians arrayed in a phalanx of wheelchairs in anticipation of a visit from the only therapeutic hedgehog company to still receive state funding.  They hold out their arms to receive the little darlings, swaddled in angora blankets of agape, tenderness hanging in the air like Spanish moss on a southern oak older than the French-American War.

Rating:
–On the scale of lesser know facts about hedgehogs–
The Four Roses 2012 Limited Edition Single Barrel is their propensity to self-anoint when in the presence of toxins–When they catch a whiff of an unusual smell, it triggers a Flehmen’s response and much foaming at the mouth, at which point they lick their spines to make themselves into poisonous badasses.  I mention this response because like hedgehogs, Stephen nosed the Four Roses, began grimacing wildly and foaming at the mouth, and attempted to lick his own back.  (Bill has the video, Stephen, so we’re expecting you’ll see the wisdom of sharing what remains of the whiskey.)

–Our thanks to Nick Clark and the good folks at Four Roses for the sample!