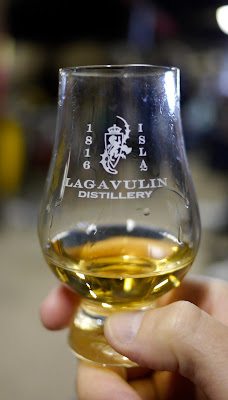 The day after visiting Ardbeg, the weather turned, as it’s wont to do on Islay, and we found ourselves late and driving through light rain to Lagavulin for a tour and a warehouse demonstration with head warehouse man, Iain MacArthur.  Marjorie Orr expertly guided all of us (we joined a larger group of tourists) through the distillery, proffering informative tidbits along the way and conveying a deep sense of attachment to the place.  That attachment was due in no small part to the fact that she had been with Lagavulin for some time–and the fact that her husband had worked for Lagavulin only added to that attachment, I’m sure.  My only complaint is one you can find in many other reviews of the distillery tour:  they allow no photographs to be taken whatsoever.  They claim that this is due to health regulations, but many other distilleries allow you to take pictures of their entire operations–and I doubt any of them have had any problems with that.  In this case, my complaint is not a selfish one:  I couldn’t care less about pictures from the distillery tour for myself.  But now that I sit down to write a review of my visit to Lagavulin, I really wish I had some to accompany this post. 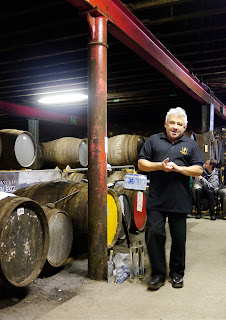 Fortunately, we were allowed to take pictures during the warehouse demonstration that followed the distillery tour.  Iain MacArthur and his 40+ years of experience commanded the room, even though the staff had crammed too many people into that particular warehouse demonstration–and despite the fact that it was a rather rowdy bunch.  Now, I attended the Lagavulin warehouse demonstration for the first time a little less than a year earlier, with a wonderful guy named Paul leading the demonstration.  But Paul had fewer than a dozen people to contend with, and he poured rather standard stuff for us.  Iain, by contrast, had upwards of thirty people in the room and opened some amazing stuff for us.  I should note that while Paul did a great job, Iain did a fantastic job:  he held that room in more or less rapt attention, mostly just by dint of his formidable presence.  Still, the charming stories, Iain’s wiping the whisky off his hands by rubbing it on a guy’s head, and the back-of-his-hand level of familiarity with the distillery and its whiskies didn’t hurt, either. 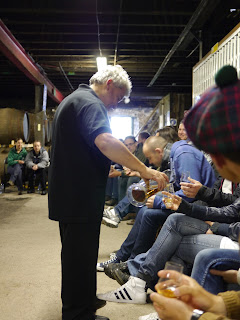 Somewhere during my post-Islay travels, I lost my list of the whiskies he poured for us that day, but I do remember an 8 year-old and an 18 year-old, both straight from sherry casks, and I think I remember a 14 year-old from a bourbon cask.  Whatever they were, they were amazing, and I was given the impression that at least some of that amazingness was for my benefit.  For that, I am deeply grateful.  I do not for a minute believe my presence warranted such a revision to the warehouse demonstration, but such is the hospitality of Iain MacArthur and Lagavulin.  Many thanks, again, all around.
Finally, having a chance to chat with Iain in his office over a Port Ellen was a pleasure, once again, I am quite sure I did not deserve.  I’m glad to say, however, that I didn’t let that stop me.  Iain was so kind and gracious, I don’t really know where to start.  I will say, though, that he is about as steeped in Islay as a human being can get, and it makes him a singular figure, and one whom I feel extremely lucky to have had the chance to meet.  (And if you want some flavor of the man, he made an excellent video for Lagavulin that you can find here.)
Other highlights:
•   Though Lagavulin is known for its peaty character, it’s only peated to 35 ppm.  Oh, and the distillery reeks of the peat notes that are very particular to Lagavulin.  For me, that last fact made the distillery tour a ridiculously happy experience.

•    Lagavulin is just down the road from Laphroaig, which is just down the road from the town of Port Ellen (and Ardbeg is just down the road from Lagavulin).  And it takes longer to get to any of these places from Bowmore than you’d think based on a map or a SatNav/GPS.  Especially in the rain.
•    Like Ardbeg, Lagavulin boasts a stunning location right on the water, and one that warrants a little time to admire–even in the rain.
•    Lagavulin is owned by multi-national drinks company, Diageo.  On Islay, Diageo also owns Caol Ila.  I assume the no photographs policy is corporate dictum, in part because Caol Ila has the same policy.  Otherwise, though, nothing about my distillery experiences at Lagavulin felt corporatized.  I credit the amazing people running the distillery and the Visitor Centre for the authentically Ileach feel to the place.  That and the location.
•    The Lagavulin distillery only bottling, should you be so lucky as to find it there when you visit (it’s often sold out), is basically a cask strength version of the Lagavulin Distiller’s Edition, which another way of saying it’s incredible.
I have a very, very special place in my heart for Lagavulin.  It’s the stuff that got me so into whisky in the first place.  Beyond that, I simply love the stuff.   And my experience at the distillery–and especially the opportunity to meet and chat with Iain MacArthur–did absolutely nothing but reinforce that sentiment.
Lagavulin is sometimes maligned for being part of Diageo, on the grounds that Diageo is too “corporate.”  When you visit the distillery, however, you see why Lagavulin continues to be an extremely popular brand, especially amongst whisky afficianados, despite its connection to Diageo:  it’s the people behind the spirit.  They know its long traditions well, and they honor and keep them close to their hearts.  The result is a whisky as excellent as the people who produce it.