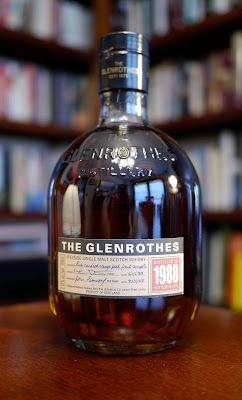 Tasting notes:
We’ve seen really dark, ruby-red whiskies before, but this 23 yr. old really gets our attention.  The nose is like a Persian Buttercup (Ranunculus asiaticus).  Not for its smell, but for the many layers on the nose that open up like the profligacy of petals on this pretty flower.  First, there are sultanas kept overnight in broth of brandy so as to serve as the central player in a brilliant attempt to bring the gustatory marvel that is the Turducken to the vegan and raw foods crowd.  Then the still-wet sultana is stuffed inside a sundried chokeberry, which in turn was placed inside a slightly rotten Riesling grape.  Then, in a universally-panned political statement, the trio of dried fruits was pushed into a Palestinian date, enveloped in turn by an Israeli fig, and then forced into a Iranian prune.  After this, it’s the aroma of a hydoponically-grown pluot, now made to surround the mass, which in turn is encased by a pear that had undertaken its entire lifecycle up to this point inside a paper bag tied in place by Monsanto-trained bonobos who could reach the farthest limbs more easily than Capuchin monkeys.  This, and nothing less, is what we got on the nose.
The mouth is fiery, but it’s also as if it were quickly extinguished by freshly-cut straw banded with a leather thong.  [Stephen:  Not that kind of thong, Bill!]  In this way and in others, the mouth turns out to be “inflammable” in both key senses of that term.  The mouth puts a garland around the dried fruit Turducken, a garland of African violets, or perhaps of the more absurd Africanized violets.  This last addition takes the whole effect up a level, transforming it into a vegan Turbaconducken.   [Bill:  Improbably enough, I’m still thinking about the other kind of thong…]  The mouth is remarkable.  Exceptional even.  It’s an exceedingly long mouth: it’s a blossoming Cherry tree, but from a distance and on a sunny day.  It also features marzipan raindrops and raisins barely digested by a Cedar Waxwing as it hits a windmill and lands on an electrified fence.  And I’ll be damned if it isn’t also like swimming in a dried fruit sombrero, while being showered by tinkling cupids.
The mouth is so long that it occludes the finish, a “post-mouth mouth,” as it were.  Or perhaps that’s just what a finish is.  But it doesn’t feel like that, it feels more like experiencing phantom limb pain:  in this case, the phantom mouth.  Even more accurate would be that it’s occurring in a phantom orifice.  It’s as if my tongue had a nictitating membrane that could experience this post-mouth mouth.  It’s a veritable deus ex mouthina, with God leaving us to experience the tri-partite mystery of a mouth followed by a post-mouth that was different from a finish.

Rating:
–On the scale of noteworthy achievements in 1988–
The distillation of the Glenrothes 1988-2011 is Public Enemy’s “It Takes a Nation of Millions to Hold Us Back”—
Bass! How low can you go?
Death row. What a brother knows.
Once again, back is the incredible
The rhyme animal
The incredible D, Public Enemy Number One.
It think it’s fair to say that the good people at Glenrothes received the memo: Turn it up!  Bring the Noise!  This they did, and we have them to thank for doing so.

Our thanks to Danielle Katz, David King and Glenrothes for the sample!