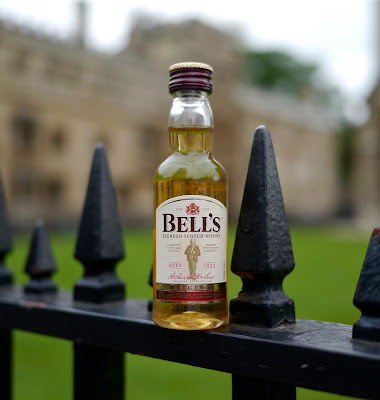 True, Tom, so true.  But for our purposes here, it’d be much more appropriate to say: You can’t unsmell a Bell’s.  Sure, the smell will fade over time, but until it does, you’ll be confronted with mutant green apple turpentine assiduously sweetened with saccharin.  Oh, and as you ponder this singular aroma, you’ll also notice that the legs on this dram seem to be trying to escape the glass.  But there is no connection between the two.

Right you are, Oscar.  But even more right would be: A Bell’s isn’t a Bell’s ’til you drink it.  And it’s really not.  And by that, I mean that it’s on the mouth that Bell’s really shines.  Though it’s a bit thin and watery in terms of mouthfeel, there’s a nice complementary set of flavors here:  snapdragon blossoms up against a wisp of gunpowder from a stage gun, extra wide pine floor planks recovered from a 150 year-old house and slathered with caramel sauce, and an ultra-premium pâté made from ultra-premium moles–and another made from ultra-premium mole (sauce).

Innocence is like a dumb leper who has lost his bell, wandering the world, meaning no harm.     –Graham Greene

You just plain nailed it, Graham.  Nailed it.  But that guy would be a much dumber leper indeed if he’d lost his Bell’s… No wait.  That isn’t the direction I’d meant to go with that… Wait, we were headed toward the finish, weren’t we?  Hmmm… Let’s see… Oh!  Got it!  The dumb leper who’s lost his Bell’s links up here because there’s a great burn on this dram’s finish…much as I assume leprosy…burns?  God, that’s awful.  While it’s true that the Bell’s has a nice burn on the finish…well…yeah.  Moving on…

Overall, this is an exceptionally solid dram, especially for the price–so no Liberty Bell cracks here.  And it won’t make you go deaf like the bells of Notre Dame did Quasimodo.  But get a good taste of this dram, and it very well might inspire a Pavlovian response next time someone mentions a Bell’s.

Rating:
–On the scale of obvious quotations for this post–
The Bell’s Blended Whisky is John Donne’s
Therefore send not to know
For whom the bell tolls,
It tolls for thee.
–That’s right:  Bell’s tolls for thee.  Get thee to a nunnery.