We’ve resisted doing interviews in the past, because we weren’t sure how to do them in proper Malt Impostor style.  But the confirmation of the Higgs Boson particle made it clear to us.  How exactly that worked we don’t have space here to explain, but suffice it say, it was some heavy stuff.
But we’re very happy with the results, thanks in large part to a cooperative interviewee… 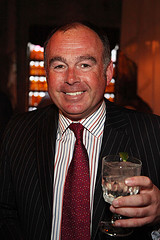 MI:  We understand that you’re now the U.S. importer of the Glenrothes.  Was it the case that you just found it on the side of the road, as it were, when one of your competitors discarded it, or did you actively pilfer it from their portfolio?

DK:  Well….pilfering is definitely to be avoided, and things that I have found on the side of the road are tricky too particularly if you are going to put them in your mouth, but those lovable Brits Berry Brothers and Rudd know a good home when they see it and a good dram, too.

MI:  We also understand that the Glenrothes is just one part of a large portfolio of whiskies you import.  However, your company’s name is Anchor Distilling.  Do you do any distilling, or is your name just a misnomer?  And if it is a misnomer, why would you do that to people?

DK:  We do distill on a daily basis. We have a small but perfectly formed distillery right here in San Francisco where we produce Junipero Gin, Genevieve Genever and Old Potrero Rye Whiskey, none of which are misnomers but all of which are difficult to spell.

MI:  If Glenrothes were a dog, what breed would it be, and how long did it take to housebreak?

DK:  I love the question and on a personal note I have been described as a Rottweiler puppy: still quite nice but potentially dangerous… still, enough about me. Glenrothes is a relatively large distillery but only 2% of production is used for single malt. So I am thinking a highly bred big dog…how about a red setter? Because a bit like their puppies the vintages are all a bit different. In terms of house training, this malt is pretty well behaved but we have been producing since 1879 so we should be avoiding the little accidents in the corner by now.

MI:  We’ve heard rumors that the Glenrothes does well.  Like top 30 whisky brands in the U.S. well.  Why do you think that is, and how much do you think it has to do with the fact that the fat, round bottle just takes up more shelf space than other whiskies’ bottles do?  Oh, and a follow-up:  what do you think was the actual inspiration for the distinctive Glenrothes bottle:  a fishing float/bobber or a hand grenade?

DK:  Yes, Glenrothes does do well, but as the school report says, “could do better”.  I do think as bottles go, small and round is good, which is not true in many aspects of life. I think the fact that Speysides do well in the U.S. helps because it is a great example of the region. The actual inspiration for the bottle was the sample bottle used by the distillery manager in his office, which mysteriously was always less than half full. For clarification it was the whisky sample bottle, not his medical sample bottle!

MI:  Lots of whisky makers, like Balblair, Glenrothes, and Highland Park (in the UK market, at least) are jettisoning traditional age statements in favor of Budweiser “born on” dates.  [USA! USA! USA!]  And some (like Macallan) are getting rid of age statements altogether.  In view of all of this, describe the quality of your wife without reference to her age or birth year.

DK:  Well as you should know by now, it is maturity that matters, not age! As in if you are good enough, you are old enough, etc. Having said that, I have always appreciated a younger woman (but not in a Jerry Lee Lewis kind of way). As long as she is balanced, interesting and versatile, I am well satisfied. Oh, and she is Scottish as well, by the way.

MI:  We’re assuming you wanted to talk to us in part because you were trying to get the word out on where the Glenrothes is heading in the near future.  Other than into our mouths, where is it heading?  What do they have up their sleeves in the near term?  And how much of it are we going to be able to taste?

DK:  Actually, Glenrothes the village is not really going anywhere at the moment, but the whisky is progressing. We release new vintages in addition to our reserve range and try and make each one a little different. I am currently particularly excited about the 1988 vintage, as it takes me back to the days when I was slim and had hair (on my head). We will soon be releasing a selection of very old single cask bottlings of which there will be very limited supply.  No doubt they will come at a cost, but that’s why I love the Select Reserve for everyday and sometimes even twice a day drinking.

MI:  Would you rather sell one ten million dollar bottle of Glenrothes, or ten million $1 nips? Explain.  And show your work.

DK:  You are not the first to ask to see my work, but hopefully it speaks for itself.  We Scots try to be relatively humble, generally speaking, although I was never sure about that Gordon Brown. Anyway, as a man of the people, I would like more amongst you to try The Glenrothes so I would err towards the $1 nip, even though economically it would be a struggle.  So how about 5 million $2 nips?

MI:  We’ve been told that you started out with Berry Bros. & Rudd over 15 years ago, so you’ve had some connection to Glenrothes from way back now.  Who is this “Berry Bros. & Rudd” and what role does actor Paul Rudd play in the day-to-day operations?  And using an analogy like “Crunchy peanut butter is to foreplay as skinning a fish is to smelling nice”, characterize your new role with respect to the Glenrothes in comparison to your old role.

DK:  Berry Brothers and Rudd are Britain’s and probably the world’s oldest wine and spirits merchant. That means they source really good stuff from really good people and sell it to discerning chaps like yourselves (oh, and they have been doing it since 1698).  I personally have not been there for over 300 years, but the owners of the business are on to the 8th generation, which shows stamina if nothing else. Amazingly, there has never been a Paul Rudd in the company, but he could be an Anchor Man here in America?  As to my new role versus the last… A honey badger is to a bee hive what a Scotsman is to a bar.

MI:  Finally, on recent trips abroad, both Stephen and John noticed the Glenrothes Robus Reserve in duty-free shops.  They also noted that it’s a full liter (as are many other duty free only expressions) rather than 700 or 750 ml.  Several questions:    What does Robus (or is it R.O.B.U.S.?!?) stand for?  Is it a secret acronym or does it refer to the sculptor, Hugo Robus? And why 1 liter?  Is one expected to drink the difference on the plane?

DK:  The good news is you were both clearly drunk (normally the best way to fly unless you are the pilot) as it is ROBUR Reserve, not ROBUS Reserve. This refers to Quercus Robur, which is the type of Oak used to make sherry casks, as opposed to Quercus Alba from which Bourbon casks are made. So Robur Reserve has an extra percentage of first fill sherry casks in the bottling compared to Select Reserve. Alba Reserve uses only used Bourbon casks in the bottling. Hugo Robus the sculptor has, to the best of my knowledge, never sculpted a cask or planted an oak tree, but if he were to, I am sure a Glenrothes would aid his labors immeasurably. Finally with respect to the liter size you are expected to share the remainder with your fellow passengers and possibly the crew, although as mentioned above, with the exception of the pilot, unless he insists, in which case make sure you have enough, so buy two bottles.

–Our thanks to David King for answering our questions and for being such a sport in doing so!