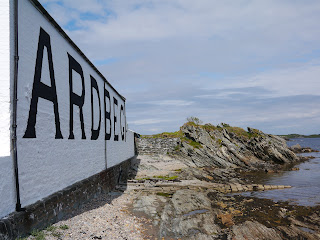 On an uncannily gorgeous June day, my pulchritudinous traveling companion and I strolled out of the bright sunshine into the incomparable Ardbeg Café, which offers (as far as I’m concerned anyway) the best lunch on Islay and which also houses the Ardbeg gift shop.  There, Jackie Thomson, the Visitor Centre Manager, met us and handed us off to Christy, our intrepid tour guide.  In the course of the tour, I came to think of Christy as “Christ with a Y”, in no small part because this was the phrase I used in referring to how she spelled her name and because she responded that she gets that all the time.  Fortunately, Christy did not suffer from a messianic complex, and unfortunately, she couldn’t turn water into whisky, but she did do an excellent job of showing us how the Ardbeg distillery does.  One of the many factors that contributed to that assessment was that Christy was born and raised an Ileach, a fact that lent great authenticity and charm to her understanding of the history of the distillery (not to mention other personal stories she told). 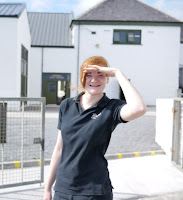 She also kindly chided me, along with the other Impostors, for not having reviewed more Ardbeg expressions and for having commented so unfavorably on the one we had reviewed.  Duly chagrined by our oversight on both of those matters, we’ve since remedied the latter issue and will soon begin addressing the former.  (We own, have tasted, and have even taken notes on a number of Ardbeg expressions, but had, rather inexplicably, just failed to post reviews as of yet.  But they’re coming.  Stay tuned.)
Other highlights:
•    Ardbeg is a very small distillery with a very interesting history.  There are also many great stories relating to the distillery that reflect the local flavor of the town and Islay more generally. 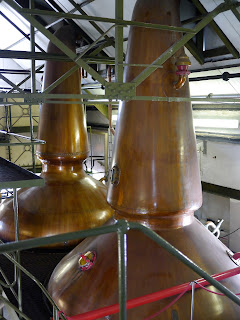 •    Ardbeg has only two stills, one wash still and one spirit still.  Given the ubiquity of its brand name, its reputation amongst whisky drinkers, and the distinctiveness of its spirit, the fact that the distillery has only two stills is rather shocking.  But Ardbeg prides itself on its artisanal character, and this is a big secret to its success.  And it doesn’t hurt that the two stills are HUGE.
•    Especially on a nice day, Ardbeg’s location right on the water makes it a stunning place to be.
•    The vast majority of the casks Ardbeg uses are ex-bourbon barrels.  That much may be obvious by the color of the whisky and the soft vanilla just behind the peat in pretty much every expression Ardbeg produces.
•    And once again, the Ardbeg Café is simply brilliant.
Looking back on my whole experience at Ardbeg, our Ileach tour guide captured well the combination of grounded history and youthful exuberance that is characteristic of Ardbeg.  Thanks to its recent history, especially that leading up to and following Glenmorangie’s purchase of it, Ardbeg comes by that character honestly. 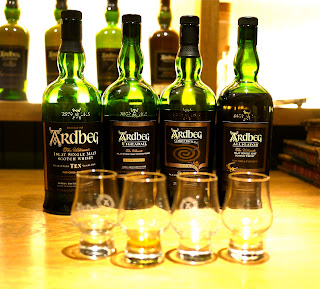 But Ardbeg has also carefully cultivated the character that circumstances gave it.  No one does branding better than Ardbeg:  the distinctive artwork, the cheeky slogans, the little dog, the black and green labels on the dark green bottles, and even the tattoos (both permanent and temporary) all help give the uniquely peaty spirit an aura that it simply would not have otherwise.  That’s not to diminish the spirit one bit.  Rather, it’s a claim that underscores the formidable power of great branding.  If you love whisky, it’s impossible not to be taken in by Ardbeg and its marketing: it’s that well done, and it only adds character to what is already a singular whisky.