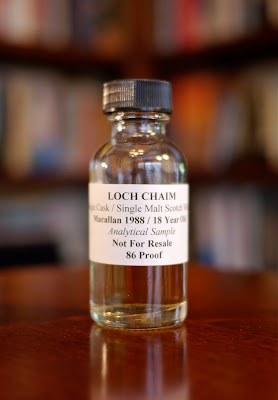 Tasting notes:
On the nose, the Loch Chaim Macallan 1988 (18 years old) presents as Marie Antoinette’s merkin, seized after the Battle of Agincourt, then lovingly preserved in a hermetically sealed drawer in the British Museum. [Stephen:  Bill! The Battle of Agincourt was in 1415! Marie Antoinette lived from 1755 to 1793! And what’s a merkin got to do with it?] It’s the Koa wood surfboard of Prince Kamehameha the Great after being scoured with pumice and oiled with coconut pulp. The surfboard, that is, not Prince Kamehameha.
On the mouth, punky edam cheese, divested of its regal robe of cardinal red wax, wrapped instead in butcher’s paper, left on a subway train, found by a six-year old, and eaten before his Danish au pair could stop texting her parents about her pet ferret to shriek at him. It’s a port wine cheeseball, besplattered with roast hazelnut pieces—picked by specially trained wombats—and served by an impeccable waiter with a port-colored birthmark (in the shape of the Bacardi rum bat, which is neither a “rumbat” nor a “wombat”). All of which makes me wonder: why isn’t the logo for Macallan a wombat? Anyone? Anyone? Bueller?
It has a Macallan seriousness about it; almost as if it objects to my clowning it. It’s as if it’s playing Haydn String Quartets loudly to drown out the dissonant rambunguousness of my notes. [John:  Bill! “Rambunguousness” is NOT a word!]
Something is, something as, something does: And the finish goes on and on. A beautiful Macoun apple, baked in Brie, maybe, sprinkled with brown sugar and currants. It reminds us of Beauty’s relation to the Beast: a yin/yang dual, forming a frisbee to toss in the Elysian fields, frolicking towards Valhalla, then dangling on Calvin’s spider webs, and finally ending up in a dystopic—but not dyspeptic—Marxist future. All good, especially if there is Raclette cheese melted on the apple, too…and no fish, no soap, no caramel, and no artificially introduced polypeptides.

Rating:
–On the scale of sisters of famous South American guitar duos–
The Loch Chaim Macallan 1988 is Badi Assad–Do I read that as “Bad Ass”? How could I not, because the Loch Chaim Macallan 1988 is a bad ass; a bad-ass apple falling far from a namby-pamby apple tree: the sort of apple that will kick your ass, and take your name, all the while playing soulful ballads for you on a nylon-stringed purple heartwood guitar.