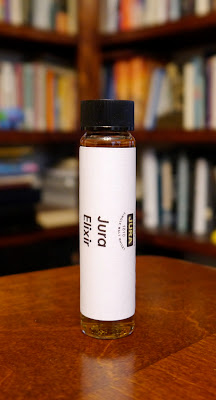 Tasting notes:
On the nose, this dram presents with the distinct aroma of a caramel dissolving in a mild solvent.  And next to the bin within which this reaction is taking place, there is a line of butterscotch candies, each one unwrapped so as to yield its odeur to the room more efficiently.  Then, with a moment of shock, on the nose we discover that just off the edge of the table along which someone has lined up the butterscotch candies, there is a marzipan chalk outline of a murder victim, and some aspects of the outline don’t quite compute unless you imagine that the victim met a rather gnarly death.  On the mouth, the slight astringency one would expect after nosing this dram doesn’t disappoint–in that it comes through.  The marzipan reappears here, too, though this time molded into a shiv and smuggled stealthily into wherever it is that one is smuggling it.  There’s also the delicious tang of sawdust on the mouth, the powder-fine remains of a beautiful mahogany dresser dismembered with a tool inappropriate to the job.  However, we found great sweetness here as well, the kind one would expect to find after having flossed with cotton candy.  The finish presents with a hint of artificial sweetness or perhaps artificial coloring (we imagined F, D & C brown), though it’s hard to say which.  The overall effect left us a bit split on this dram.  In fact, it provoked one Impostor to deem it eminently regiftable (should one be so fortunate as to have such friends as those who would give one whisky as a gift).  In response, another quickly but quietly quipped, “I’d take it.”

Rating:
–On the scale of split decisions that left viewers a bit dissatisfied–
The Jura Elixir is Rocky Balboa’s loss to Apollo Creed in the film Rocky–It’s certainly less unjust, but no less unexpected, than Michael Spinks’ defeat of Larry Holmes (mainly thanks to the fact that Rocky wasn’t real).  Plus, it was the perfect setup to the sequel.

Ooops!  Sorry about the spoiler there.  Though if you don’t know what happens in the film by this point…I don’t know what to tell you, except perhaps:  I hope the rest of your initial introduction to Western culture goes well.

–Our thanks to Harry Hussain, Weber Shandwick, and all the good folks at Jura for the sample.