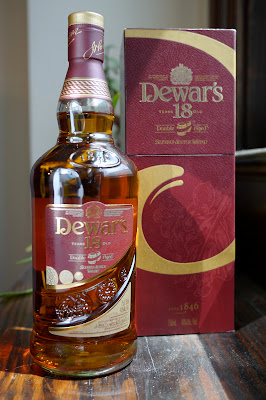 Tasting notes:
On the nose we found bourbon notes mixed with aromas from a sour caramel apple–or a caramel sour apple (both are in there).  We also wondered if maybe that pair of caramel apples hadn’t been left for a day or two in my grandfather’s study, next to the walnut stand cradling his Calabash pipe, its Meerschaum bowl still full of half-smoked Vanilla Black Cavendish tobacco.  But then John said no, that wasn’t it, and that he had arrived at the proper read on the faint smoke on the nose:  it’s the smoke, he said, being pulled through the ventilator of an airplane bathroom, as one examines the 9-volt battery terminals on the lavatory smoke detector, trying to ascertain which one is male and which is female.  Perhaps he’s right, but Bill and I found the nose so beautifully balanced overall, we were reluctant to analyze any one aspect of it too closely, lest we lose the overall effect for the particulars.
The mouth presented us with a variety of flavors:  there was a caramelly apple-ly cloying sweetness that tied the mouth and nose together nicely (figuratively, of course, as literally tying your mouth and nose together would not only be horribly painful, but doing so would also render you a repulsive freak fit only for circus work–worse yet, that would prevent you from nosing or drinking the whisky).  There were also distinct notes of lilac and heather soap (Scottish Spring™: Womanly, yes, but I like it, too!), Amway perfume, and an aged cheese made from the milk of an extra-mammalian species.
The finish is not terribly long and resides almost entirely on the tongue.  And while we tend to prefer more itinerant finishes, we found this dram to be insanely drinkable.  In fact, Bill has suggested we fill our hydration bladders with this expression for the next time we participate in the Tour de Sots.

Rating:
–On the scale of apple varieties that are somewhat sour–
The Dewar’s 18 is the Jonalicious–It’s a relatively large red apple that stores well and is quite versatile.  And the name’s fairly descriptive, too.

–Our thanks to Andy Black and the good folks at Dewar’s for the sample!