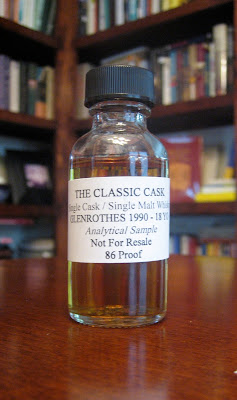 Tasting notes:
My first impression of the Classic Cask 1990 Glenrothes (18 years old) was pecans in caramel, or a pecan pie cut too soon after emerging from the oven.  But this pie was missing something.  Or perhaps it had one ingredient too many.  Still, there was an agreeable openness on the nose.  Think of farm-raised oysters which, owing either to low seratonin or learned helplessness from weeks of abuse, yield in the shucker’s hands with only slight pressure from his thumbnail.  As the nose opens further, the pecan pie shows itself to have a tarry quality, as if it rests in an asphalt crust.  None of this, however, prepares me for the mouth.  Oil and sand.  It’s a simple as that, except that the sand is so fine that you don’t taste the grit, just the mineral dryness that puts bright white balls of spittle into the corners of your mouth like those of a lecturer droning on long past the point that anyone can listen further.  But you’re thinking about what’s in your mouth and how you’ve never tasted anything like it.  Perhaps a diesel-drenched cormorant wrung out by a pair of FEMA-trained otters would come close.  Better still, fracking liquid, high in polyacrylamide and naphthalene, coursing down a hillside.  Mine, I’m not proud to say, is the revulsion of the rubbernecker.  For soon the lesser angels of my nature bid me to return to the glass.  With a steadily-building fascination, we find now floral hints—a hedgerow of gardenia swept up in that mountain flood, perhaps?  No, more like a heavy-scented flower on the cracked tarmac near the capital of a failed state during the second coup in a week.

Rating:
–On the scale of additives for hydraulic fracking that look like amorous utterances between love-making Klingons—
The Classic Cask 1990 Glenrothes is “Alkyl Aryl Polyethoxy Ethanol.”—[John:  Stephen, is this acceptable to print here?] [Stephen:  I think you’re okay, John.]