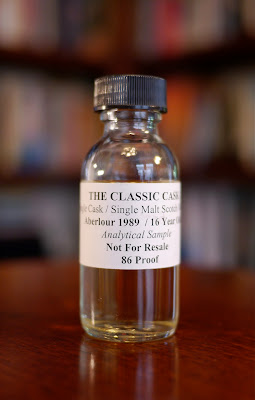 Tasting notes:
On the nose, the Classic Cask 1989 Aberlour (16 years old) presents with notes of honeycomb with hair caught in it.  Before you jump to the conclusion that that reference is meant to be off-putting, let me finish.  This isn’t stray hair from the floor that the sticky substance picked up once dropped on the floor.  No, the hair caught in this honeycomb is Gwyneth Paltrow‘s–the result of a failed luxury treatment for split ends.  Improbable, you say?  When would Gwyneth ever have split ends, you protest?  Fine.  We also found notes of rosehip tea served in a Stan Smith Adidas sneaker–a left footer.  Is that sufficiently probable for you?  I thought so.
If the nose presents with honey, the mouth is dripping with it:  and not just any honey, but the rich stuff, reduced with Madeira in a Yoshi Blue™ frying pan.  There’s something inorganic and, dare we say, rather urban on the mouth:  imagine being stopped at an intersection, only to have a Squeegee man wipe a honey-soaked rag across your windshield so he can charge you two dollars to squeegee it off.  And imagine it doesn’t bother you in the least, because your windshield really needed to be cleaned anyway.
The finish on this dram is unique, to say the least.  We got World War I medals dropped into a porcelain spit sink in a dentist’s office alongside clean, loamy earth ordered from an airline shopping magazine.  Lest the mention of dentists get you down and make you consider doing bad things to yourself to avoid going there, it’s not a real dentist’s office in this case.  Rather, it’s a sink from the set used in the classic movie Little Shop of Horrors in the scene featuring Steve Martin and Bill Murray.  Feeling better already, aren’t you?  Thought so.  Now shut up, lay back, and read the rating!

Rating:
–On the scale of clean dirtiness–
The Classic Cask 1989 Aberlour is Gopher, the eponymous burrowing rodent from the Disney movie Winnie the Pooh and the Honey Tree–definitely preferable to Perlite-fed worms, though not obviously better than The Underminer from The Incredibles.  Still, though Gopher may be less edgy than The Underminer, at least it’s not the case that nothing is beneath him.