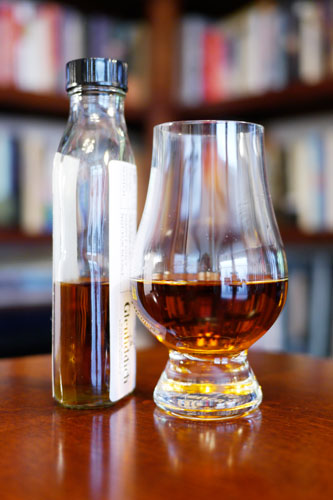 Tasting notes:
Looking deep into the glass of the Balvenie Craftsman’s Reserve #1: The Cooper is like locking eyes with a panther’s 1000-yard stare, evoking a coiled tension—a perfection of motion—that is patiently waiting to spring. Fortunately, in the Malt Cave, we keep our glasses bound up with braided leather falconry jesses, so I wasn’t worried about being attacked, except by Stephen’s ferrets.
The nose is like being in an old mahogany wardrobe festooned with brass hooks, feather boas, velvet cocktail dresses, and Narnia’s cinematic witch, Tĩldã Swĩntõn and her equally hot German half-sister, Ümläüt Swïntön. But I was fearless (if a bit gaucho); besides the Lion, I was armed with a bolas sporting two dark chocolate oranges dipped in caramel that was made with heavy goat cream and maple sugar. For me, the caramel emerged from its lair only after mouthing the dram and mounting the panther: Before that, it was all the wardrobe and the Swintons for me. And raisins marinated in prune juice. Oh, and to an occasional honorary MI team adjunct✳, it was the plasticine scent of a Beatles LP coming out of its sleeve.
This panther turns out to be hard to tame, but Bagheera-like in his affection for humans. On the mouth, fire, more fire, and a tongue depressor crafted from winesap apples. Fire burning on Rolo pretzel turtle coals. Anise-scented wanna-be hippies (they ran out of patchouli) doing the Monster Mash-up Dance of the Seven Batiked Veils Against Thebes. And more fiery raisins, this time marinated in honey made from bougainvilleas and purple tulips. With water, earth against fire. [John: This dram really volatilizes my esters!]  Autumn sunsets, and piles of leaves. Adze shavings from the cooper. Maple bacon minus the bacon. [Stephen: There’s a little known Zen koan: What is the smell of frying maple bacon without the bacon?] 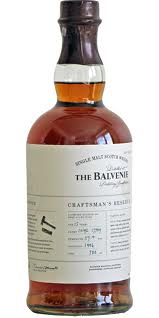 The finish is as if conceptual artist Damien Hirst (of the cow in formaldehyde “fame”) sculpted lemon and mango zest into a flash-frozen medieval mace, and smashed my face with it. But it goes from fierce to friendly, as if a genetically altered skunk that sprays camphor metamorphosed into Pepé Le Pew wanting to keeess you, mwah, mwah, mwah. More caramel, raisins, and the Tallis Scholars singing the masterpiece Spem in Alium.

Rating:
–On the scale of removals from actual, real reality–
The Balvenie Craftsman’s Reserve #1: The Cooper is the content farm link to the blog post review of the song ironically referring to the novelistic adaptation of a movie based on a picture of a drawing of a poster of the Olsen twins wearing t-shirts emblazoned with images of bobble-head dolls of Derek Jeter and Lance Armstrong☃.–What does it all mean? We don’t know. But the Balvenie Craftsman’s Reserve #1 is the Bradley Cooper of Coopers: Fabulously Rich (in flavor), Charming, and Dreamy. Is any of this real? What is “real”? Can we know the real? Help?


–Our thanks to Nicholas Pollacchi and the good folks at The Balvenie for the sample!

☃ –Does not actually really exist!