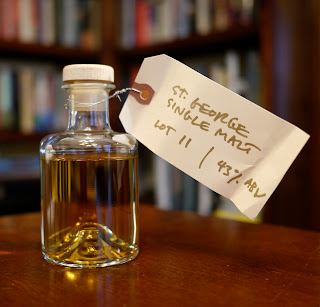 Tasting notes:
Holy Fourteen Holy Helpers, Batman! St. George, slayer of dragons, venerated in the Koran, patron saint of England, and (you guessed it) Georgia is one of the Fourteen Holy Helpers, and was (is?) thought to be especially useful for the health of domestic animals. We decided to test this hypothesis in the Malt Cave, for we are nothing if not scientists in the holy pursuit of truth. We poured a dram for Stephen’s prized ferret, Philofax, for John’s beloved aardvark, Hymenoptera, and my enigmatic platypus, Perry. Here’s what they had to say:

“It doesn’t smell like whisky. But then again, I’ve never smelt nor drunk whisky before. Maybe like vodka or gin? Gin infused with peatberries? I always get my Peat-inis mixed up.”

“It’s an evasive dram, like trying to pin Mitt Romney down on an important issue. Who is this Mitt Romney, anyways?”

“I’ve had Kool Aid before. This is like whisky-flavored Kool Aid that Joe Camel would offer to tweeners. By the way, what’s a tweener?”

“It’s got a Montrachet thing going; a bit oaky, a bit flinty, a bit French, a bit spectacular.”

“It’s a little hot, with a little bite, like being nipped by Joshua (Man)Hatton‘s puppy.”

“It’s dangerously drinkable. In fact, give me that bottle!” (Hymenoptera, give that back! Hymenoptera! That’s probably poisonous to an aardvark! Dear God!)

The panel reports: Evidently St. George was watching out for these domesticated animals!

Rating:
–On the scale of successful scientific studies–
The St. George Single Malt, Lot 11, is the Michelson-Morley experiment (1887)–It put an end to Lord Kelvin’s Vortex Theory, and pretty much said “good-bye” to the aether as an explanation for how light travels through space. It’s still a mystery, but a good one, one to puzzle over with your domestic animal and a dram of the dangerously drinkable, damnably delicious and delightful St. George Single Malt.

–Our thanks to Ellie and Lance Winters and Dave Smith at St. George Spirits for the sample!