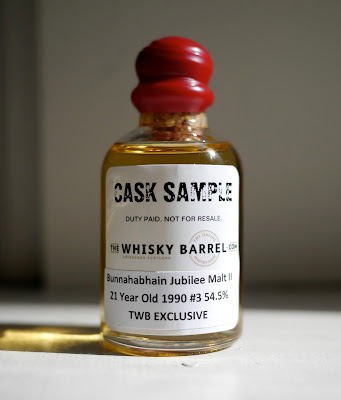 Tasting notes:
I just went to a malt singles bar hoping to pick up a few drinks. There was a barely legal 21 year old Bunny there, habin’ a good time. (hic!) I don’t know who was responsible for letting such a hot, well-rounded gal with great drams into the place, but I’d like to thank him. [Stephen: Bill!  You know it was Alastair from TheWhiskyBarrel.com who’s responsible this one!] I sauntered over, enticed by the way her perfume, which I took to be Eau de Citron Lard aux Oignons Caramélisés, merged with the wafting scent of well-worn oak bar. She said her name was Julie, er Jubilee—hic!—and she looked full up to the neck when I met her. When I got closer, she smelled like Kate Middleton—not an old friend—smells like when she burps after pecking at an arugula salad dotted with caper berries and boss, er, bosc pear slices. (hic!)
I liked the look of her, was hoping to get some mouth feel from her, too. After raising a glass, it was…Heaven. Like being in the old beloved sauna on the estate of Greve Lennart Torstenson (in the county of Ortala) with Queen Christina’s noble steed, drinking a palliative of honey, ground up amber (for conspicuous luxury), distilled safflower oil, all mixed in the crystal flask of regret over The Road Not Taken.

Her mouth was like fire, like early onset dementia (hic!), and my tongue throbbed and modulated under the—-am I dreaming? No, and it turned out she was a brand ambassador, so I asked her if she had dispomaniac immunity. (hic!) She said she’d take me there, but there is no there there. She’s a real nowhere (wo)man, and I’m alone with my memories.

Rating:
–On the scale of 3D movies about cave art at least 25,000 years old–
The Bunnahabhain Jubilee 21 TWB Exclusive #3 is Werner Herzog’s Cave of Forgotten Dreams— Chico Marx interrupts to say, “Hey, you no canna fool me! There’s only one 3D movie about cave art at least 25,000 years old!” Guilty as charged: The movie is unique, as is the Bunny. Speaking of regrets, though, why did Stephen split this into thirds?! I want the whole thing!

Our thanks to Alastair and the good people at The Whisky Barrel for the sample!  This one is the whisky of the week there!