This was my first Extravaganza without my co-conspirators, and as sad as it was to have to go without Bill and John, it wasn’t my fault that those two couldn’t make it:  John had finally decided to give skeet shooting another chance (after years of eschewing the sport in the wake of the infamous “C-4 Pigeon” incident), but ended up Dick Cheney-ing Bill, resulting in a hospital stay and some light reconstructive surgery for both Bill and John (don’t ask).  Bill showed surprising equanimity throughout the ordeal, but was most upset that he ended up missing the annual Ferret Grand National at Chatsworth.  So, alas, I flew solo on this one.
For this event, I stayed in the hotel in which the Extravaganza took place, so as to obviate the need to brave the no-longer-so-mean streets of the Big Apple and to ensure that I didn’t lose hours of my night in the process.  The Roosevelt Hotel is a grand old dame of a hotel that makes for a fine venue for an Extravaganza, offering ample room for the panel, the food, and, of course, for the whisky.  Speaking of the panel, it was, as it always is, a shouldn’t-miss event:  brand ambassadors young and old telling stories, educating the audience, and generally cutting up.  Of particular note on this panel, however, were a couple of great stories from Evan Cattanach, Brand Ambassador and Master Distiller Emeritus for Diageo. 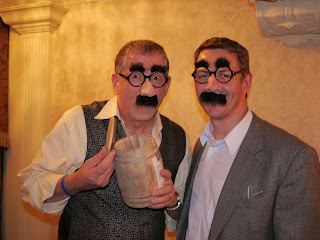 As usual, the spread of food was excellent, with the pork tenderloin, the beef, and their respective gravies standing out in my memory as particularly impressive.  I hit the food first to provide a base layer (it’s a common rookie mistake to wait too long to get around to the buffet–one John, Bill, and I learned the hard way).  Then, it was on to the whisky.
Highlights for me in the main event included catching up with old friends Robin Robinson from Compass Box, L.J. Heffernan from Diageo, David Blackmore from Glenmorangie, Andrew Weir from Balvenie, Greenie D. McGee and Greenie’s human, SMWSA President Alan Shayne, Malt Maniac Peter Silver, and whisky collector Matt Lurin.  Other high points 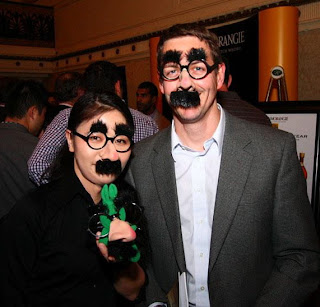 included making a few new friends: Andy Black turning me on to the Dewar’s 18, David Tabachnik walking me through the Laphroig range–right up to the 25 year-old, meeting Stephanie Ridgway and tasting the HP 15, and having an Aberlour 18 and chatting with Ross Graham.  Finally, I had a few other whisky revelations at the event:  the SMWS 27.96 is particularly fantastic, the taste I got of the Glenmo Artein makes me want to have some more, the Auchroisk 20 year has a nose like no other whisky I’ve ever had, and Compass Box’s new box and label designs are tremendous.
As I’ve noted elsewhere, it takes practice to do an Extravaganza right (that is, without trying too few whiskies or without ending up in a scene from The Hangover–or any possibility in between).  Look for one near you soon and practice.  Hard.  You’ll be glad you did.