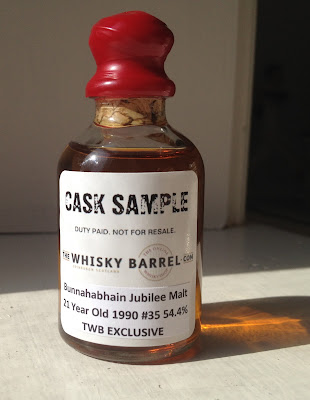 Tasting notes:
There’s more leather on the nose of this dram than on our commemorative R.A.F. MK. IV Malt Impostor flying goggles.  It’s like I’m at the mall walking out of a Wilson Leather store and into a COACH outlet wearing Bill’s gimp mask after a lost bet.  It’s a 1:12 model Ferrari made entirely from weasel hide for the tannery-auto trade show circuit.  It’s a pair of Alden Color 8 Shell Cordovan Chukka Boots worn by Usain Bolt in competition then kept in an evidence bag after complaints that the results were “wind aided.”  And yet amid the leathery depth there are surface notes of sweetness.  Toffee popcorn dusted with nutritional yeast and a few drops of Braggs Liquid Amino Acid.  Artisanal candy corns dropped into a ramekin filled with dulce de leche.  Dandelions wilted under a heat lamp with shaved pecorino cheese and sugared bison jerky.  (Weirdest.  Salad.  Ever.)
On the mouth the sherry and leather combine portmanteau-riffically into shining sheathery deliciousness.  Thick but alarmingly astringent nut butter topped with boysenberries, and a mix of wax and honey from the frame of noted smokeless apiarist, Barry Gibb.  Thus, there is just wax and honey—and perhaps a touch of the leather whip he uses to keep the bees from stinging him.  Perhaps it’s merely the heat of this cask-strength Islay Bunny, but we also picked up some grapefruit pith and asparagus zest.  Water smooths the dram considerably.  It takes all of the flavors above and organizes them obsessive-compulsively into a Fibonacci sequence.

Rating:
–On the scale of unbelievably descriptive titles for a work in philosophy that you simply cannot believe reached a sixth edition–
The Bunnahabhain Jubilee Malt 21 Year Old 1990 #35 is Samuel Clarke’s A Letter to Mr. Dodwell; Wherein All Arguments in his Epistolary Discourse Against the Immortality of the Soul Are Particularly Answered, and the Judgment of the Fathers Concerning that Matter Truly Represented. Together With a Defence of an Argument Made Use of in the Above-mentioned Letter to Mr. Dodwell, to Prove the Immateriality and Natural Immortality of the Soul. In Four Letters to the Author of Some Remarks, &c. To Which is Added, Some Reflections on that Part of a Book Called Amyntor, Which Relates to the Writings of the Primitive Fathers, and the Canon of the New Testament, 6th edn (James and John Knapton, 1731).  As you can see, this Bunny has a lot going on.