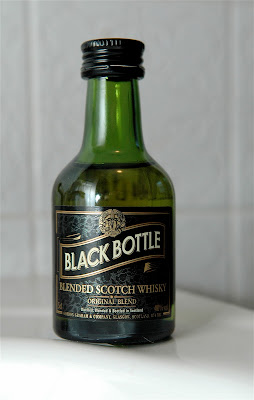 Tasting notes:
The Black Bottle gives rise to a classic variation of the Cartesian mind/body schism. The body just wants to drink the damn stuff, enjoy it, and quiver like a bing cherry Jello™ mold being pawed by an inquisitive kitten’s paw. (And just think what a cute YouTube video that would make!) However, the mind–restless, questing, insatiable–needs to analyze and agglutinate words. Otherwise, of course, no review. The nose is like a ninja blow administered by Angelina Jolie, method acting in a martial arts expert role. Blood trickles out your nose, dripping into your mouth: salty, coppery, and undercut with an herbal emollient. She oversteps the directorial vision, and grabs your tongue in a vise-like GI Joe™ kung fu death grip. She rubs soy sauce drenched nori on it while you helplessly flail. After leading you around like a drooling basset hound come the other courses: Peruvian pink salt pie, buttered salt bagel, salted rock fish, pure halite……..salt is just the greatest effin’ rock around!
A tannin-like Brillo™ pad flenses your tongue, then brings the salt and pepper, quickly balming it with iris nectar. She pours a cask of Amontillado down a clean titanium shotgun barrel, then lights a spicy fresh Romeo y Julieta™ cigar, and blows the smoke down the barrel into your mouth (while still clutching your tongue). Giddy? Yes. Oddly sexualized? I’m afraid so. The fig-heavy fruit salad vanishes, and leaves behind…………longing. The body is the body, and the mind is Angelina Jolie? I’ll take a Cartesian paradox, thank you very much.

Rating:
–On the scale of dolls–
The Black Bottle is the American Girls™ series–It’s ubiquitous in a covert sort of way, beloved, and known only to parents of six-year old girls. The Black Bottle strikes me like that; I tried to convince a few yuppies to buy it instead of a more expensive bottle of something that tastes inferior, but Barbie and Ken were convinced that they had to get Skipper a “name” bottle. Fools.