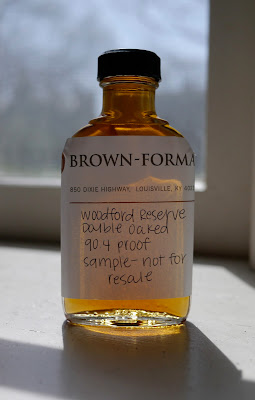 Tasting notes:
We all know of the infamous moving of the London Bridge to Lake Havasu and of the infamous copy of the Parthenon in Nashville, but up ’til now, none of us (at least) knew of the (hypothetical) Edo Castle (江戸城) built (in Versailles Kentucky nearby the Woodford Reserve Distillery) out of vulcanized rubber, amber-encased oranges, found fallen defoliated forest logs, vanilla-butterscotch-caramel paper, and the un-ironic optimism of Iowa high school cheerleaders, circa 1950. What else could explain the complex melange of aromas wafting out of the souvenir ceramic thimble Stephen and John let me drink out of?
More Scotch on the mouth than I’d expect; almost as if the double time in the double barrel inspired the corn to bow gracefully to the other grains, and allow them to take center stage. Creamy green apple cider drunk from an old well bucket dried in the sun in a low-humidity environment. The overall sense of a cheerful toddler on a course of HGH and steroids swinging a freshly sawn 2×4 beam drenched in blood orange and lemon juice in his grandpappy’s barn. That is, if his grandpappy’s barn was a Baked Alaska that had been soused with Chenin Blanc and whipped butter.
The finish is a Taiko drum crescendo played with Louisville Sluggers on hollowed out barrel-sized pecan-studded caramel apples. And when all else has gone, Edo Castle remains, so long as you’re also kissing a maple-syrup drenched Angelina Jolie in the sunset.

Rating:
–On the scale of doubles, the Woodford Reserve Double Oak isn’t a stunt double, because this is no trick. It’s not double or nothing, because I can’t bear the nothingness of anything. It’s not a doubling cube, although I like thinking that I can double my pleasure by ordering a double. It’s not doublespeak, double-take, or even a Spanish doubloon.–No, it’s KFC’s infamous Double Down sandwich–Two thick and juicy chicken filets, two pieces of bacon, two melted slices of cheese, and NO BUNS. It’s beyond double delicious.

Our thanks to Brittany Gilbert and the good people at Brown-Forman for the sample!