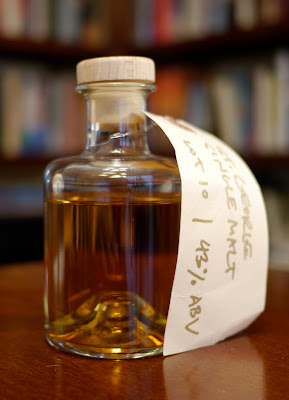 Tasting notes:
Wow, there’s a singular smell on the nose.  A suggestion of locker room, a whisper of artificial lemon, and the unmistakable appurtenances of white-chocolate covered Funyuns™.  We also get the wooden stick of a caramel apple turned into a pistol by the imagination of a bullied seven-year-old.  The apple notes on this dram make us think of little, 5 oz. juice boxes filled with whiskey so that you can take them along on play dates and picnics.  (Look, if you can find great beer in cans, why not wonderful whiskey in cartoony juice boxes?  Oh, and with flexible Glencairn straws glued to the back!)  Such might account for the aggression of that pistol-waving boy but as I look again, I see that I was wrong.  He’s conducting an orchestra.  He wants more from the apples sautéed in butter, or so it appears from the upward-arcing sweep of both arms.  And now his gestures are gentler.  He’s telling the flames to get lower, lower, lower; he wants the thinnest of thin blue lines to be barely visible under the cast iron pan.  Yes, he’s happy now as he straightens himself and uses the stick baton to signal the entry of mulling spices.  First cardamom and then allspice.  Now cinnamon in greater numbers, but with room for orange peel and cloves.  They are all in harmony as the restless flames are brought back up.  Our maestro beams with exultation as the blue flame fingers rise up, up, up until they are tipped with fiery-yellow nail polish blurred by shimmering waves of heat–
–just how many of these little juice boxes have I had?  Or did the good people at St. George drop in a little of their absinthe into this batch to tart it up

in mind-bending ways?  On the mouth it’s incredible.  I’ve got a Poprocks feeling around my tongue, enough to remind me of the urban legend that Life® cereal’s Mikey died from too many poprocks (autopoprocksasphyxiation?).  This rêverie unfolds with more nostalgia, this time for early adulthood.  It’s like watching Field of Dreams with a soon to be ex-girlfriend.  The finish—of the whiskey and the relationship—recalls nothing if not ionized butterscotch in a steel mess kit (long story).  But then the whiskey changes.  Candied fruit in a silver tray.  Hard tack dipped in molasses.  How can they get such complexity in this whiskey?  I think they’re dropping freeze-dried single malt cubes into the bottles.  Each cube–which look like black tar heroin, if you must know–presses signature upon signature into the dram, like those on an LCD pad at the checkout counter, a veritable 21st Century palimpsest for future textual scholars to decipher.

Rating:
–On the scale of awesome “10”s–
The St. George Single Malt Whiskey Lot 10 is Bo Derek–Not as classic or as apparently universally applicable as The Ten Commandments (but also not nearly so dated), Bo was nonetheless smoking.  Plus, she helped popularize cornrows and slo-mo beach cinematography.

–Our thanks to Ellie and Lance Winters at St. George Spirits for the sample!