[This is one Master of Malt sent us just to get us to review it for them (see our Disclaimer here). Our thanks to Natalie and Master of Malt for the sample.] 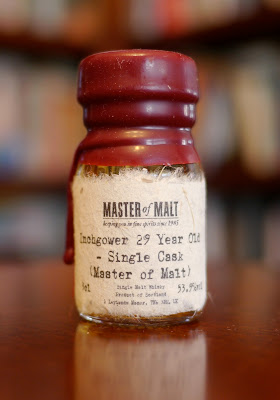 Tasting notes:
The Inchgower 29 pours into the glass like a Darren Aronofsky movie being screened in a pub. No, the pub is not a hipster “dive” with angsty bespectacled 29 year-olds wearing bowlers, talking about the glorious fellowship–excuse us, person-ship of the Occupy Bahamas movement. (Didn’t hear about that one? That’s because they only occupied a beach.) This pub is a dark place, but goddamn if the Inchgower doesn’t smell like swan wings, Black Swan wings, or maybe just Buffalo wings in a blue cheese sauce AND NO CELERY. I hate celery.
I confess, I’ve been riffing for fun, but really, the Inchgower 29 does smell like actual swan wings, especially if the swan was splashing about in a pond of lemon pepper sauce with spatterdocks (that’s “yellow pond lilies” to you, Stephen) dotting the surface. It’s créance (that’s “leather training leash” for you, John) on a peregrine falcon, especially if the falcon was swooping through the Museum of Dried Fruits in Loulé, Portugal.
After that nose, I was expecting duck soup or Tom Kha Gai, but instead found grapefruit tarted up with grenadine and a sprinkling of clown tears. It’s like snorting sweet tarts crushed to powder on a glass coffee table and railing against the system. (Get it? Snorting? Railing? John? Stephen? Anyone? Bueller?) It’s like drinking a ten billion pound note from a failed country whose currency value is in freefall, floating in the virtual cloud of inflationary balloons. Never before could I say that I’d drunk a banana daiquiri, a veritable banana republic, a banana oligarchy, a banana nation-state, a banana gynocracy in a glass of scotch. I’m not sure I can now, either. Or did I just?
The finish is like the aftershock of chewing on a bitter palm leaf that was pickled in vintage lemon juice (1985, a good year for lemons) and jarred in a stoppered Lalique vinegar cruet. Bitter, but not like an old spinster, but rather like 87% cocoa chocolate. The rich life, not sweetened.

Rating:
–On the scale of fish-eating birds–
The Inchgower 29 Single Cask Master of Malt is Nigel, the pelican in Finding Nemo—He saves Marlin, is pivotal to the plot, and voiced by Oscar™-winner Geoffrey Rush. What more could you want in a pelican–or a whisky?