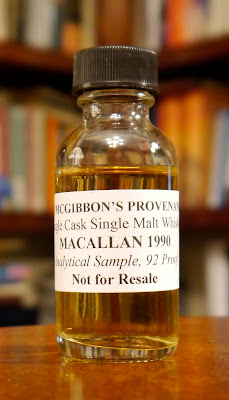 Tasting notes:
The McGibbon’s Provenance 1990 Macallan is a curious dram.  At first, one senses no nose, much as the retro-famous fractal-precursor mathematician Gaston Julia lost his nose in World War I and wore a leather mask for the rest of his life.  Yes, the Macallan 1990 came long after WWI, and although the image looks photoshopped, I am unaware of a digital aroma-rizing application for cropping odors.
Breaking with good malt protocol by wedging the neck of the 50ml tamponetic vial into my nose resulted in two important things.  First, it guaranteed that neither Stephen nor John would want any more of the dram after my “nosing” was a fait accompli.  Second, it revealed a refined, buttery, milkweed wisp, like a lucky dragonfly licking Pippa Middleton’s cheek.  If, that is, her cheek and that lucky little bastard of a dragonfly were coated with clarified butter and stuck in my nose.  Not making much sense, am I?
Sliding the vial up the other nostril like a coke-mad disco-era record producer cramming a rolled Benjamin up his nose in Studio 54 felt a lot like an ENT insinuating a strange pair of pliers made out of forged pig iron into my sinuses in an intubation gone awry.  After that sort of surgery, showers of phlox and hand-washed silken undergarments on parade.  In my nose.  Sort of.  Odd.
After wiping the bottle neck clean, and relying on the 46% abv to kill any unwanted bacteria, I finally tasted it.  Explosively incredible; an origami swan turned into a 1:200 scale reproduction of the Schwarzwald.  A kaleidoscope of grapefruits, kiwis, and guavas juggled with dried roses saved from a wedding by an utlra-limber contortionist during a 4th of July parade.  Majestic, like being clocked upside the head by Mike Tyson in his prime.
Trumpets with mutes and saxophones with Icebreaker wool socks stuffed into the bell herald the finish, which mysteriously jilted me, and left me like Dickens’ The Mystery of Edwin Drood, or Schubert’s Symphony No. 8 in B minor, or teakwood deck furniture purchased from a gasohol-powered van parked in a shady suburban neighborhood.  That is to say, unfinished except for the clanging as juice cans clatter down the gentle rise.


Rating:
–On the scale of wonderful things that bulge in the middle and tail off at both ends–
The McGibbon’s Provenance 1990 Macallan is the Gaussian distribution bell curve–That is to say, it’s fundamental to the study of…most everything, and if you’re lucky, you’ll be one of the 6σ-people who get to drink the dram.