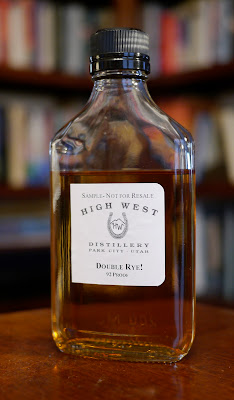 Tasting notes:
The nose on this rye whiskey is somewhere between the smell of a mostly empty microwave popcorn bag that’s been recently abused by high school dropouts trying to huff 100% organic glue through it and that of feet pulled from a pair of World War I boots after weeks in the trenches and then promptly drizzled with caramelized sugar cane.  This singular juxtaposition led us to wonder aloud:  “What makes it a ‘double’ rye?”.  An initial answer came from the latter end of that spectrum:  “They put their feet in it?”  Now, while that answer is funny, we knew it couldn’t be right (and wasn’t exactly descriptive of this dram).  We should note that we never read up on such things ahead of time, mostly out of fear that doing so might undermine our status as impostors, but this flavor profile on the nose had us looking it up.  While Bill tapped away at his google machine, we moved on to the mouth and found another surprising juxtaposition of flavors present:  green or unripened rye grain on the one hand and cough syrup for cows stored in elmwood barrels on the other.  And the finish is simultaneously sweet and spicy:  a cheap lemon sucker from the bank dropped in the corner of an Indian spice market (so what if I don’t have any kids?  I can still get a sucker from the bank teller…).  As it turns out, the source of these juxtapositions is the pairing of a 2 year-old whiskey sporting a mash of 95% rye with a 16 year old whiskey with 53% rye, 37% corn, and 10% feet something else.

But don’t take all of this to mean that the flavor profiles here are overwhelming, because they are not:  the preceding represents our findings after focusing our   surgically and pharmaceutically enhanced malt senses on this dram.  Kinda like an art critic being able to pick up the sense of foreboding in the patternless drips of a Jackson Pollock or the deep rumble of the echoes of eternity represented in the fields of color in a Rothko.  What’s that?  You say what art critics do is b.s. and that that stuff isn’t in there?  Suit yourself.  We hope you enjoy your shallow and meaningless existence.  But to return to the whiskey, let’s be clear:  if you look closely, there’s a lot going on here, and not all of it will be to everyone’s liking (if by “everyone”, you mean “Bill”).  But if you don’t try to do the equivalent of hearing the distant rumbling in a Rothko, you’ll find that this rye whiskey is pretty damn solid and quite drinkable:  Don Draper would chug this stuff and would love it, even if it were his 10:30am hair-of-the-dog first drink of the day.

Rating:
–On the scale of unlikely pairings/juxtapositions–
The High West Double Rye is Reed College’s infamous 1980’s S&M/heroin subculture–Two great tastes that, as it turns out, taste great together, but who would’ve ever guessed that one in advance?

*–Our thanks to Troy Karnes and the great people at High West for the sample!