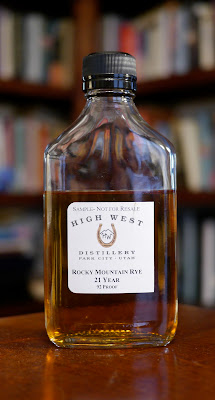 Tasting notes:
Thankfully, this whiskey is not, as its name suggests, actually the testicles of something from the Rockies, disguised so as to vaguely resemble a rye, at least until the bartender reveals the secret to you.  But this is no standard rye, either: the nose of this whiskey is at first curious, then becomes curiouser and curiouser.  Pencil erasers, a marzipan saguaro cactus, tennis balls fresh from the tube, poppy flowers pressed between sandpaper sheets.  And there is fieriness there, too.  On the mouth there’s more tennis balls, cinnamon and allspice, and caramel reduced to the point that it could safely hold tiles to the underbelly of the space shuttle.  Snow drops walked on by cowboy boots.  To be more precise, they’re gila monster skin boots with ostrich uppers.  It’s like I’m sucking on a lozenge created by a crack team of Swiss scientists to combat Seasonal Affective Disorder.  On the finish, there’s some mentholated eucalyptus that borders on Kid Kam‘s Cajun-style Eucalyptus.  Perhaps you heard of him?  The koala bear dropped off in Baton Rouge that eventually went native?  He now operates the only restaurant in the world that exclusively offers blackened eucalyptus, for his previous attempts at eucalyptus “from the barbie” excited not even
murmurs from the local newspapers and food critics.  All of this is to say that there is a va-rye-ity of flavors to enjoy here, and more flavors than we thought a rye could offer.

Rating:
–On the scale of awesome names for 5th Century Armenian commentators on Aristotle–
The High West 21 Year Old Rocky Mountain Rye is David the Invincible–So awesome is this name, and so fitting a tribute to this fine High West expression, we choose to ignore the worries that the author was active in 6th C., not the 5th; that he was not Armenian; and that he wasn’t named David.

*–Our thanks to Troy Karnes and the great people at High West for the sample!