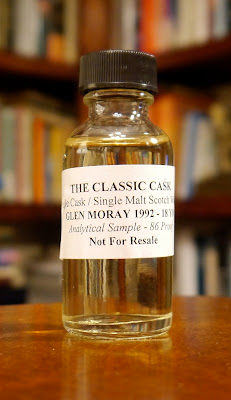 Tasting notes:
The Glen Moray 1992 opens light and flowery, with tiny drips of honey suckle.  I cooly appraise it, and not taken in, reply with salty hibiscus crisps folded up in aluminum packets.  The Glen Moray 1992 takes my measure, and ups the ante with tarragon-infused olive oil, and then manages to pull the oil back off the table while leaving the tarragon infusion. “Neat trick,” I mutter, nervously fingering my cherished chert tankard artfully carved with tasteful tableaux of caber-tossing Scots.  I raise the stakes, without pulling up stakes, with pale meringue whipped up by a dengue-fever-infected merengue-dancing ingenue (who looked like a young Catherine Deneuve).  Then the Glen Moray 1992 braces, for evidently nothing will hold back the sprinkling, like the running of the bulls, of the flecks of black licorice.  I permit myself a smile.  The Glen Moray 1992, not batting an eyelash (well, I guess it doesn’t have any eyelashes), unleashes a small, precise flash of heat; a veritable mini-anti-tastebud device fashioned by an impish forest elf.  In response, I throw the book of the Jenever conventions at the Glen Moray 1992, and say, drily, “Gin.”  But there are no juniper berries to be found (nor any other berries, either), only the ripply pineapple Life Savers™ we are using as chips.  I rake ’em in like an all-star, sniffing my fingertips and the green velvet tablecloth.

Rating:
–On the scale of events improbably called “sporting” that are watched by millions of people–
The Classic Cask 1992 Glen Moray is the World Series of Poker–We all dream of getting rich by our wits and inscrutability combined with Lady Luck, but we’re all happy to lose our shirts to an opponent like the Glen Moray 1992 (even though I won, because even I know that the Glen Moray 1992 isn’t alive).


*–Our thanks to Jerry Zimmerman (and Aron Silverman and the good folks at The Classic Cask) for passing on this sample to us.  In our book, that makes him Great.  Slàinte, Jerry!