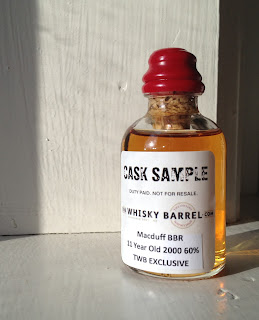 Tasting notes:
This is a post-holiday dram if I’ve ever had one:  on the nose, there’s smouldering mistletoe strewn along the side of the road, with marzipan reindeer at regular intervals, chewing placidly on the sherried merry cherry berries.  On the mouth, there’s pepper and cinnamon and sweet cranberry heat, much like I found on my tongue after peeling myself–and my tongue–off of my neighbors’ driveway the next morning, only to find that I did actually dance there the night before on the fruit cake they’d given me as a gift, but only after I’d doused it in Tabasco in front of them to convey more clearly my true feelings about said gift.  But don’t get me wrong, I could swim in this stuff:  it’s wonderful and sweet, just like the feeling of realizing what I’d done–once the horror of realization had worn off and the wry joy of the truth had set in.  On the finish, asphalt butterscotches, definitely asphalt butterscotches–you know, the kind Santa leaves for naughty kids or for unrehabilitated juvenile delinquent neighbors–and I’m not just saying that because of my proximity to the driveway, I assure you.  The smoke lingers on the finish, but it’s the smoke from an oil drum trash fire on the banks of the River Deveron that hobos have used to smoke the pork tenderloin, plums, and lingonberries they stole from my house whilst I was passed out

on the pavement.  The finish tingles with magical sparkles and hints of tar, not unlike those I feel in my head at this moment–and not unlike those I would imagine I’d find if, improbably, I made it to the roof just a moment after St. Nick’s sleigh pulled away.

Rating:
–On the scale of regrettable holiday escapades I’ve had–
The Macduff 11 Year Old 2000 TheWhiskyBarrel.com Exclusive is the night I got drunk and got into a tiff with my girlfriend, only to find the next morning that I’d torched my own car, not hers–You know, I’d cut back on the drinking during the holidays, but it’s the only thing that gets me through.

Our thanks to Alastair and the good people at The Whisky Barrel for the samples!