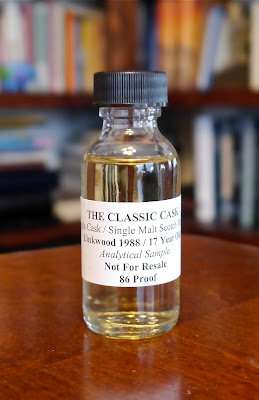 Tasting notes:
Pears.  Honey-pears.  Candied honey-pears.  Honey badger?  The nose of this lovely dram wafts around like an over-perfumed first love.  Scented duct tape included in a hastily-assembled Mother’s Day gift basket.  More sweetness than Walter Payton.  Distilled molasses aged inside of a gigantic Jolly Rancher™.  It really smells like wine and has a super light runny mouth, like the sassy 9-year-old girl that lives down the street and likes to talk to your dog in some sort of language fit for elves.  On the mouth it’s high, fresh, lovely.  Elegance and refinement abounds.  I’m getting the taste of a buttersoft high-grained white leather belt worn by Liberace and now used to fasten my wrists to a headboard (“We’re just joking here, right?  He-he-he… he?”).  Perhaps it’s more like the mineral taste of the metal buckles on Charo’s high heels.  Now there’s spoonfuls of sugared grapefruit and rosewater syrup.  The finish brings a touch of salt collected by fairies from the tips of saffron stamen overlooking a Mediterranean port.  And yet there’s an edge here, too, like that put into a fancy straight razor polished noisily on a leather strap.  Volcanic ash and peppercorns muddled in a Jefferson cup with a rhinoceros horn pestle.  Late wisps of smoke from a wood-fired Jacuzzi set in the Mongolian steppe.

Rating:
–On the scale of failed attempts to prove one’s divinity to onlookers–
The Linkwood 1988 Classic Cask is Empodecles throwing himself to his death into Mt. Etna, then an active volcano–As I think about it, is there any more spectacular failure to prove one’s divinity to onlookers?  And yet it did secure a measure of immortality for him: there is an underwater volcano off the coast of Sicily named “Empedocles.”  What’s more, when the tip of the volcano rose up above the surface of the sea in 1831, an international kerfluffle ensued as four nations attempted to claim it.  The only thing that settled the dispute was the submersion of the volcano back under the sea five months later.

*–Our thanks to Jerry Zimmerman (and Aron Silverman and the good folks at the Classic Cask) for passing on this sample to us.  In our book, that makes him Great.  Slàinte, Jerry!