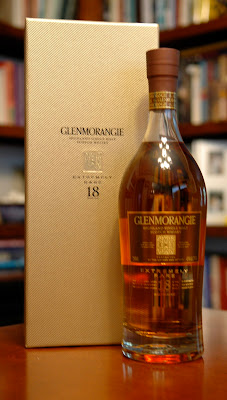 Tasting notes:
The nose on this dram is gorgeous and refined, with oranges and figs from a well-integrated grove from pre-war Lebanon.  As the dram opens up, the nose turns downright exquisite, revealing caramel and bananas flambéed with Barbados rum in a copper saucepan from the kitchen of the court of Louis XIV.  On the tongue, it is so smooooooooooooooooooooooooooooooth, it’s ridiculous:  it’s as smooth as a pale twenty-something New Englander imagines he can be on the beaches of Aruba in January.  Amidst the nearly tactile smoothness (that’s right, it’s that smooth), subtle and complex flavors come through:  the meat from Korean barbecue spareribs expertly centered within the best dim sum bun you’ve ever tried, or a full buffet at the Kakawa Chocolate House after completing the Santa Fe Chocolate Trail (and no, that’s not a euphemism).  Still, the smoothness is overwhelming.  It’s as though the liquid itself has been blended to the point that all of its molecular bonds have been broken, leaving only bosons and neutrinos. (Bill:  I’ll go you one further:  it’s a fractal, it’s non-rectifiably delicious, it’s 1.5 dimensional.) (John:  Ok, I call bullshit.) (Bill:  I’m gonna box dimension yo’ butt with my Hausdorff measure, poseur!).  This dram finishes more like a liqueur than a scotch, but the complexity is amazing.  It’s like someone turned a huge red peppercorn into a jawbreaker, but instead of eating it, decided to cross-breed it with a Fabergé egg complete with a reproduction of Versailles’ hall of mirrors inside.  Accordingly, this metaphoric mutant spawn echoes sweet spice infinitely down your tongue and throat.

Rating:
–On the scale of things that one hopes are infinite—
The Glenmorangie 18 Extremely Rare is time—I mean, come on:  if space were infinite and time weren’t, seeing it all would be hopeless.  This way, you can conceivably cover everything and use what’s left over to sit and drink the Glenmorangie 18.  This last bit also happens to be my own personal vision of what heaven would have to be for me to want to stay that long.


Our thanks to David Blackmore and the good people at Glenmorangie for the sample!