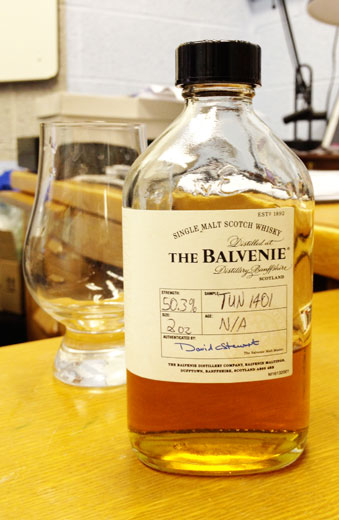 Tasting notes:
Today, class, we’re going to explore a new topic in journalism by examining the works of novelists Kingsley Amis, Ernest Hemingway, and Thomas Wolfe. What did they all have in common? Yes, yes, they each had two eyes and only one nose. Very good, but I hoping for something else. Indeed, they all wrote in English, and they all used typewriters–I’m impressed you know what those are–to produce their books. And yes, surely they are all dead…is Kingsley Amis dead? Oh, okay, thanks for checking that out on Wikipedia while you were also updating your Facebook page. Anyone else? Aha! That’s what I was hoping for: They were all hard drinkers, and today we will see if we also can do as they presumably did: Produce memorable and dynamic prose whilst schnockered and hungover.  (Although I couched it in terms of Plato’s Symposium, this is why I asked you all to drink all night long last night.) I concede, in advance, that it’s odd that we will be drinking an expensive whisky, as opposed to cheap gin, but this is a MacArthur genius-grant-supported experiment. [Editor’s disclaimer:  Not really.]
The Balvenie Tun 1401, class, the Balvenie Tun 1401. You’d say, wouldn’t you, that on the nose one detects traces of unroasted filberts, lemon soufflé, and marzipan foam swimming pool noodles? What’s that, Cuthbert? Can you speak louder? YOU WANT TO BE EMBALMED IN THE BALVENIE TUN 1401WHILST STILL ALIVE? What is this, Edgar Allan Poe’s The Cask of Amontillado? Oh, you mean you want it used as your embalming fluid? Very ancient Egyptian; I can see that, indeed I can. An A+ for you, Cuthbert.
You claim to be smelling rashers of boiled Canadian Bacon glazed with raisins, Elizabeth. Aren’t you a vegan? I don’t think I fully trust you on this one. Hmmm, “bacon” starts with “B” and “Canadian” starts with “C.” So, a B or a C? I’m giving you an F, Elizabeth, but the two of us can always discuss how you may improve your grade later tonight in my office.
“Cruelty-free bamboo shoots”? “Yang Guang and Tian Tian‘s bedding”? How do you even know the names of the new Scottish giant pandas, Nigel, let alone what their bedding smells like? I’m not sure I can even assign you a grade. Leave and never return! You’re voted off the island! You’re fired! You are the weakest link!  Goodbye!
Okay, class, now drink. Mmmmmm. MMMMMMMmmmmmm. Like coal tar smoke hanging in the air at the end of a fireworks display after the home team takes the lead. Balanced like a Key West Mallory Square itinerant juggler, tossing kerosene-lit torches, rusty sickles, and a box of cayenne-pepper-spiked cinnamon red hots intermingled with Pina Colada-soaked raisins. What do you mean, Cuthbert, that that’s not what you smell? Get out of here! You’re fired, too! Now, what else, have another swig, all of you. “Sprigs of mechanical pencil lead,” Victoria? Intolerable! Leave at once, Victoria!
Like an old thin wire brush used to curry a springer spaniel. “Like sandalwood duct tape…patching a birch bark canoe or a pagoda built by an eccentric millionaire in Ohio”??? Begone at once, Edward, and take Charles with you!
Well, Elizabeth, we’re alone; just the two of us. Yes, just the two of us. What?! After swallowing it, all you can say is that, “It’s not fire-y, but kinda warming, like, you know?” You’re irredeemable, too! Depart, and never trouble my sight again! Good gravy, young woman, if I’m ever stranded with a broken limb in the alps, this what I want a Saint Bernard to bring to me in a very small tun around its neck: The Balvenie.
I guess now I’m truly alone, but not alone. It’s you and me, Balvenie Tun 1401. I’m…very happy to be alone with you. I find I want to keep smelling you as obsessively as Michael Jackson kept washing his hands, disinfecting his surroundings, and getting plastic surgery. Mmmmm. Another sniff? Don’t mind if I do. Old wood. Very old wood and wine aged way past the due date. Mmmmmm.

Rating:
–On the scale of things to visit again and again and again and again and again–
The Balvenie Tun 1401 is The Mountains–Anywhere in the world (that I’ve been so far), any season, any weather, they always provide a cornucopia of smells and sensations, from X-treme heli-snowboarding in the winter, to ferret hunting in the spring, to running with gray lobos in the summer, to chanterelle picking in the fall. Every day is a new adventure.


Our thanks to Andrew Weir and The Balvenie for the sample!