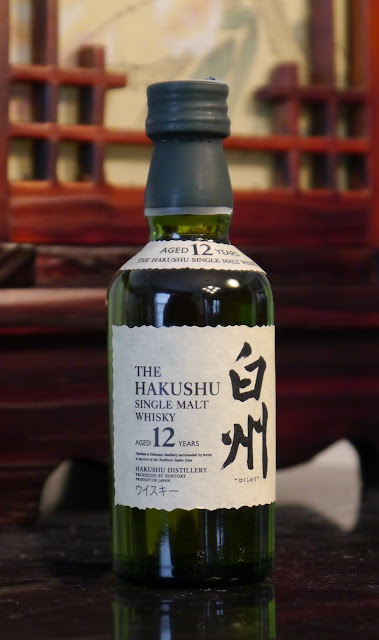 Tasting notes:
Any time there are three actual literary sisters, such as the Brontës, or three fictional brothers, such as the Karamazov’s, the three tend to fall into roles.  Being triplets from different mothers, the Malt Impostors stay true to type-casting: I am the serious, grounded brother, Stephen is the rainmaker, and John is the flibbertigibbet.  In this review, I seek to “live large,” and try to become someone I am not, such as a combination of Bill Gates, Brad Pitt, or Robin Williams: Rich, handsome, and manically unfunny.
Filling a glass with a dram of the Hakushu 12 is sitting on a whoopie cushion filled with an intoxicating blend of passion fruit body wash combined with Clive Christian Imperial Perfume.  It’s spraying distillate of artisanal Fuji apples into one’s nostrils in the reverse of spraying apple orchards with insecticides: I want the gently sweet acidity to inveigle fruit flies and aphids, as worlds are being created in my nose.  Those cloudy orbs are filled with swirling smoke and peat, drawn by Peter Max lounging in a field of alfalfa grown by the Findhorn Foundation.  And yet, so refined: A Roman Patrician nose; certainly not a honking middle European—read: Jewish—schnozz. [Note: The former sentence has been approved by Joshua (The Man) Hatton, President and Founder of the Jewish Single Malt Society.]
This strikes me as almost a Zen koan: If a thing be perfectly balanced, doesn’t that suggest that it can be unbalanced?  And if it may, in some possible world (filled with apples, perhaps) be unbalanced, how can it be perfectly balanced?  I am happy to report that it is impossible to conceive of the Hakushu 12 as unbalanced.  Therefore, it transcends balance: It is below the bedrock of the Platonic foundation of any eternal steady state non-entropic universe.  It is extraordinary.
Oranges metamorphosing through estrous cycles on my tongue, and ultimately running long and plummy.  Bonsai wood used as flooring in Victorian dollhouses.  On the very back end, primal rack of lamb, grilled on an omega-3 cured iron shovel, along with scallions and ramps coated in large granules of sea salt, held on by the barest mistings of monkfish oil.  And long plums.  Very long plums.

Rating:
–On the scale of almost perfectly balanced things (that aren’t Platonic ideals)–
The Hakushu 12 is Nadia Comaneci at the 1976 Olympic games–She knocked down the first perfect 10 in Olympic history, and followed it up with six more perfect 10s.  Her only flaw?  She’s not a triplet.

Our thanks to Yoshihiro Morita and the good people at Suntory for the samples!