[This is one Master of Malt sent us to celebrate Movember (see our Disclaimer about Master of Malt samples here). After our abject failure on getting the Cragganmore 21 tasting notes out on time, we thought we’d get ourselves in gear and get this one out before it was too much later in Movember.] 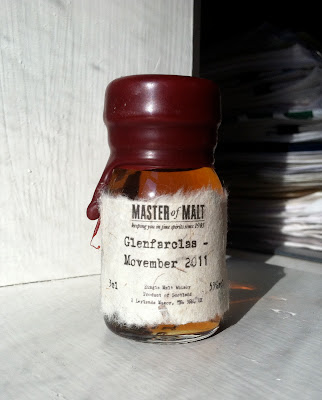 Tasting notes:
This Glenfarclas 9 year old is part of “Movember,” an initiative that invites men to show their support for men’s health by growing moustaches during the month of November.  What a great idea!  For years, women have had all the fun.  They have the Susan B. Komen Race for the Cure to support breast cancer research.  But that’s where the key difference lies.  A 5k race or fitness walk requires both organization and effort.  Movember, by contrast, is my kind of movement.  The genius is that by doing nothing, you mark your solidarity with a good cause.  I think I’ll start leaving toilet seats up to show support for Parkinson’s research, or refrain from making the bed until we have a cure for Restless Leg Syndrome.  You lookin’ at my untucked shirt?  That, my friend, is me standing up for my brothers with erectile dysfunction.
The only problem is that I could grow a moustache about as fast as your average nine-year-old.  By Thanksgiving my family would notice a vague shadow under my nose, as if I’d been sketching a charcoal still life during allergy season.  But I think the Glenfarclas is actually looking out for me.  Let me explain.  If I didn’t know better, I’d think I was nosing bourbon.  There’s a distinctive note of charred corn and caramel in an already ruby-red dram.  And on the mouth there’s an almost

newmake aggressiveness on the top note, like the whisky is looking at itself in the mirror with menace and ill intention.  So why do I think this Movember is looking out for me?  The 53% dram presses itself in on me with such assertiveness it puts hair on my chest and upper lip.  Think of wrapping a huge, newly dried tobacco leaf around a red onion and then eating it like an éclair.  Or imagine using Benamin Moore‘s anise-scented primer when painting an outhouse behind a pit barbecue joint; the splintered toilet seat will man you up as fast as one bracing slug from this dram.  Life is all about first impressions, and what I’m taking away from this is not unlike the experience of being kissed by mustachioed great-aunt after a breakfast of radishes and instant coffee.  Believe me, at this moment I am all about men’s health.  What keeps me in the game is water.  A few drops alter this dram as lastingly as the wicked witch of the West.  There is a garland of flowers and I look down to see tobacco barn-dried hay rubbed on the hind quarters of a Derby winner.  (No Derby winners were harmed in the making of these notes.)  A finish of mild corn tortilla chased with a room temperature glass of rocky mountain oyster-flavored Meat Water.  Mmmm….  Delicious.  Now I need only to wax my ‘tache with parade gloss shoe polish and I’m ready for anything.

Rating:
–On the scale of great 19th Century mustaches–
The Glenfarclas Movember 2011 Master of Malt bottling is Friedrich Nietzsche’s–It’s big.  It’s bold.  It’s punchy.  It’s a danger to all who end up standing close enough to it (and by that, I mean the whisky is dangerously tasty).  It’s something any philosopher would envy.  And it has its own Facebook page.

2 Comments on The Glenfarclas Movember 2011 Master of Malt Bottling