[This is one Master of Malt sent us just to get us to review it for them (see our Disclaimer here). We took so long getting to this one for review that it is now sold out. To Natalie and the good folks at Master of Malt, please accept our apologies–we just flat blew it on this one, as we did with the Cambus 18. Back then, we promised to do better on future posts, and we still blew it.  But damn, they sold out of this one really quickly! As such, we take our failure to be as much a positive comment on Master of Malt’s ability to move product as it is an indictment of our tardiness.  We hope you enjoy the review nonetheless.] 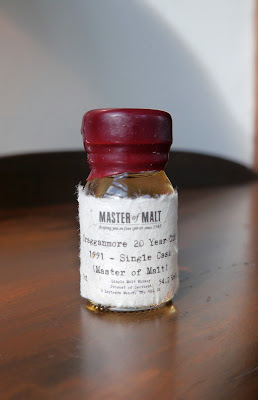 Tasting notes:
Before opening the Master of Malt mini-Me vial, my first impression of the Cragganmore 20 is that if it were a test I was grading, it would be a fail: 54.2% is an F-. (Stephen:  Bill! That’s the abv: It means that it’s 108.3 proof!)  Oh, well, thanks guys. I guess that it’s an A+. Was there extra credit on the test?
Speaking of tests, I just had a major blood draw to check up on if my malaria is likely to recur, so I am feeling vitiated and anemic. And grippe-y and ague-y. You’ll pardon me in advance if this review veers off topic, yes?
In the glass, the legs are like soda straw stalactites, slow dripping down the sides. I wonder if we left the Cragganmore in the glass for a long epoch if it would calcify, seep through the glass, and resemble an upside-down pincushion–but I digress.
Apricot, peaches, and marzipan peeps are ground in a marble mortar with a walnut pestle, and poured into a full-bodied sweet lassie. (John:  Bill! That’s supposed to be “sweet lassi,” the Indian drink, not “sweet lassie,” the 20-year old, red-haired, *maltgonewild*!) This must be what top-shelf cough syrup is flavored with for children of Brahmans in Mumbai, especially if a pinch of quince were minced on top, since it evinces minced quince. That, and peyote buttons. (John: Have you been into the peyote buttons again?!? East Indian! East Indian!)
This is eminently guzzable–is it bad to drink drink drink while bleeding bleeding bleeding?–light on the tongue, exceptionally well-balanced like Jacques-Louis David’s masterpiece, The Oath of the Horatii, and light, like kirschwasser-flavored eggwhites in a cherry soufflé. Improbably, the soufflé is topped with cockles, dripping with butter and Neptune’s tears.

Rating:
–On the scale of well-balanced scales (and self-referential ratings)–
The Cragganmore 20 is Bach’s Well-Tempered Clavier–(Am I running a temperature? Well? Is the Cragganmore a well whisky? Decidedly not.) Music today wouldn’t sound the way it does without Bach’s Meisterwerk, which reconciled accidentals, grace notes, wolf notes, mash notes, Lotus notes, post-it notes, and the diabolus in musica.