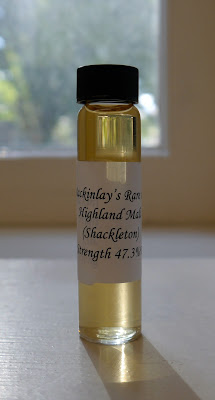 When the three of us tried this dram, there was as much intense disagreement about this whisky as a dram has ever generated amongst the three of us.  But we wouldn’t let a replica of a 100+ year-old whisky come between us, even if it was Richard “The Nose” Paterson who created it.  I took on the yoke for this one, because I had more good to say about it than did John or Bill (but then again, I’d tasted it before, during a Twitter event with other journalists and The Nose himself).  But I must be true to my compatriots as well as to my own views here, so please forgive the schizophrenic character of what follows:

Tasting notes:
Imagine an arctic—or, in this case, Antarctic—dystopia:  you’ve been moving for a long time now, and your Tauntaun is tired.  While it’s really cool to be on a Tauntaun, toting a lightsaber, Tauntauns smell…about as you’d imagine.  It’s quiet out—too quiet—and you sense a tremor in the Force, but there’s really nothing there [this is analogous to the part where I explained to John and Bill that the absence of good does not equal evil].  Next thing you know, the probes are plummeting into the snow all around you, and as they rise out of their crashed pods, you smell something akin to snowmobile exhaust.  You take off, pushing your beast as hard as he’ll go, but then he falls over, exhausted, near a highly anomalous and gnarled tree—or what’s left of one.  So you do the whole lightsaber-turns-Tauntaun-into-sleeping bag-trick [and no, despite what John and Bill might want to say here, there is no awful smell nor the “intestinal turmoil” characteristic of getting into an animal’s body cavity].  You pull open your face mask, and the cold hits you like the Shackleton does (at least to Bill’s and John’s minds, like the bracing slap from a Whyte & Mackay blend—or from Richard Paterson himself). 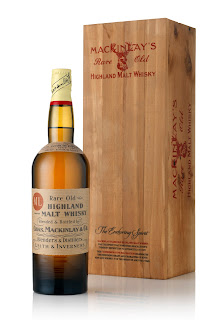 You make a small fire from the gnarled tree, and you realize as it burns that it’s an almond tree, oddly enough, and the flavors of almond, wood, and charcoal fill your palate with intoxicating effect:  so much so, that you soon think you can see—and even taste—marzipan.  But this is no normal marzipan:  this is marzipan in the shape of a buffalo—a whole herd of them!—quietly approaching your position and rooting around in the snow, digging up bits of black licorice and blackstrap molasses [in the spirit of giving even time, one of my co-conspirators thought the term jockstrap molasses more appropriate].  As you fall asleep, there’s lingering pepper on your tongue, but the sensation is a bit thin and completely lacking the flavors you’d expect:  seal blubber, ambergris, and penguin feet.

Rating:
–On the scale of stories that leave you hanging—
The Shackleton is the strange and surreal story you just read, above—but don’t fret:  it ends well.  You wake up to the warmth of a room inside an Imperial cruiser (the probes, and not a Wampa, found you), your hands and feet shackled to a block of carbonite.  But hey, you’re going to get to see your father soon!

–Our thanks to Jennifer Butler and the good folks at Weber Shandwick for the sample–and to the inimitable Richard Paterson for blending it!