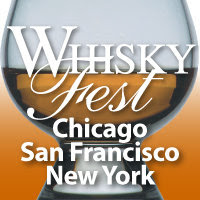 WhiskyFest San Francisco was my first WhiskyFest, and alas, I attended it without John and Bill.  But it was, in a word, a monster.  You don’t just have to be strategic in attacking it, you have to be disciplined.  And in many ways.
First of all, the VIP hour that precedes the bustling city center that is the regular part of the event includes a number of special VIP pours at a number of booths.  The problem is that they can play out rather quickly, so you have to choose wisely, Grasshopper, and choose well.  My clearest memory of that particular hour was marveling at the wicked long line at the Glenrothes, then losing my nosing glass, then begging for a replacement, only to be denied flatly at every turn (though to be fair, that rule is made clear on the site).  When I returned to the main hall with a white wine glass (looking like a tool), the sound of crickets and disappointed stragglers could be heard at the Glenrothes table, as the VIP pours were long gone.  However, another point of the VIP hour is to give the VIPs more ready access to the whisky folks behind the tables, and this I managed to take advantage of while laying down a base layer of food.  And I should add that the food was quite good and quite plentiful.
Second of all, there were seminars going on throughout the main part of the event, so once again, you must choose wisely, Grasshopper, and use the weight of your opponent against him.  (OK, not sure what that had to do with deciding to hit a seminar…got carried away, I guess).  Overall, I was more interested in taking in the main floor experience, so I opted to attend only one seminar. I chose the one starring our friend, Gable Erenzo from Hudson along with Mitch Bechard from Glenfiddich.  It was entitled, From Dufftown to Tuthhilltown, a Journey with Glenfiddich and Hudson, and it featured 8 drams, 4 from each distillery, including new make spirit from each.  Gable and Mitch did a great job of 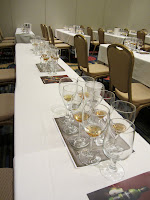 presenting, and it was fascinating tasting Hudson’s bold, young American whiskies up against Glenfiddich’s subtle Scotch whiskies.  Truly, though, there were more great seminars on offer than one could do if one attended one in each time slot.  Of course, if one did that, one wouldn’t get out onto the main floor at all…
Before going on to “Third…”, I’d like to add a brief 2(a) as a coda to “Second of all…”  One must have great discipline if one has been tasting on the main floor during Seminar time slot 1, only to attend a seminar in time slot 2 that puts 8 drams in front of him, which, during the presentation (which moves a little more slowly than he had on the main floor), are a little harder than usual to resist drinking in their totality.  [And yes, that sentence was intentionally constructed in that way so as to reflect the unenviable thought processes of the man behind the sentiment once he’d consumed those 8 drams (ok, he left some of the new make behind).]

Third, there are some crazy exciting people to meet and equally exciting whiskies to taste, and it’s ridiculously difficult to choose whom to visit and what to make sure you taste.  The primary loci of my excitement were:  John Hansell, John Glaser and the new Compass Box Great King Street (and beautiful, but altogether too brief, reunions with the Compass Box Hedonism and Spice Tree), Scott Tallon and the new Bruichladdich “Laddie” 10, David Blackmore and the Glenmorangie 25, Lincoln Henderson and everything that is Angel’s Envy, and Dave Smith and the single cask amazingness the St. George folks in California have made by distilling Sierra Nevada Celebration Ale and IPA.  The last one in particular was out of this world, especially for this Sierra Nevada lover.
So to sum up, the event was a monster, mostly because it presented monster choices, some of which I was up to, some of which I clearly was not.
But then came the moment in the night when I felt that I’d finally arrived as a whisky blogger/writer:  I found myself standing in a hotel room being undressed by a cute Scottish redhead with Tim and Dave from Malt Maniacs (and from PLOWED Society and from the LA Whisk(e)y Society, respectively), 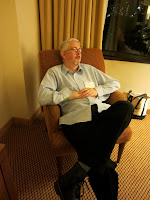 Peter from The Casks,
Chris from the LA Whisk(e)y Society, Mikey from PLOWED, Chris from Whisky Wall, and Jason from Guid Scotch Drink (pictured to the right, rocking the after party).  Also in that room were at least twenty bottles of unbelievable whisky that some combination of the first few guys had brought with them and that they were generous enough to let the rest of us sample.  It was an incredible group of people to hang out with and the perfect experience to cap off my first WhiskyFest.

–Our thanks to John Hansell and Joan McGinley from The Whisky Advocate for the press pass to the event!