Sorry this took us so long.  Many things have been cooking back at the old MaltCave, and these various projects have divided our attention.  The result, it seems, is that we’re a little slower than we would be otherwise with respect to each and every one of them.  That said, this time around, we give our account of the SMWS Extravaganza held at the Taj Hotel in Boston in the form of a three part conversation, with Bill leading off the discussion.

Bill: I think it might be better named the SMWS X-travaganza, to evoke both the X-Files and the X-games. This, because these whisky evenings strike me as being simultaneously about what we don’t know, and also about the limits of human endurance in a highly competitive setting.

Stephen:  I’m right there with both of you on this, though that last turn of phrase did make me worry that I may have inadvertently walked onto the set of Deliverance.

Bill:  Boy, you got a pretty mouth…sorry.  Moving on.  The pre-X-travaganza Whisky Panel, staffed by affable insiders Simon Brooking from Laphroaig, Kristina Sutter from Skyy, David Blackmore from Glenmorangie and Ardbeg, Andrew Weir from Balvenie, 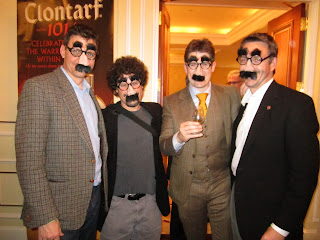 Ewan Morgan from Diageo, Ross Hendry from BB&R and Glenrothes, Iain McCallum from Morrison Bowmore, Ricky Crawford from The Glenlivet, and Gardner Dunn from Suntory, took on a sheaf of audience-submitted written questions—a veritable open case probing the mysteries of the history, the ongoing creation, and the marketing and distribution of the Water of Life. I learned a lot; for example, it seems that the royal road to get a job in the whisky industry is to either be born in Scotland (fail, sadly, for me), or to work as a bartender in New York City. As usual, my juvenile deliquency vocational counselor gave me the wrong advice. 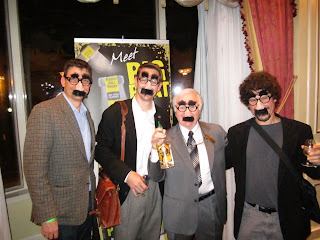 John:  In many respects the panel was the highlight of the evening.  Two things struck me:  First, the representatives spoke with great insight and expertise.  But the central message was one that empowered the audience to “have it your way,” as the fast food chain encourages.  Rather than promote the exclusivity or inscrutability of fine whisky, the panelists sought to democratize it.  Second, the warmth and banter among the representatives of competing companies spoke volumes about the world of whisky.  It shows how the love of the water of life breaks down walls and joins people together.  One feels privileged to enjoy whisky in moments like these, as though one has discovered, if not the fountain of youth, at least a fountain that makes a life more worth living.

John:  [muffled imperative directed at Stephen to do something or other obscene with himself] 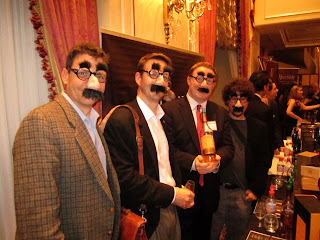 Bill:  Carrying on:  Once the panel disavowed all knowledge of us, the usual hurly-burly began: A gazillion amazing things to try, and not enough time (or stamina) to get the job done. Memories that jut out like mountain peaks socked in by a low-lying ground fog: The Ardmore 30, my goodness, and Simon Brooking walking me and my friend MiniCooper John (shout out!  Holla!) up a vertical flight of Laphroaigs, each glass punctuated by a witty toast. The Scapa 16, which I managed to taste earlier in the evening than I did at my last X-travaganza. Jerry Zimmerman leading me through the Classic Cask’s offerings, starting with the Ben Nevis, ambling through the Tomatin 16, and finally triggering the Double Barrel, that double-barreled shotgun wedding of the Highlands and the Islands, culminating, as usual, with the Classic Cask 35 year-old.  And finally, Noah Goldstein encouraging me to pound glassfuls of the Usquaebach 15 as if I were back in my rinky-dink honky-tonk in Hong Kong, playing quarters and skittles with the expats. Oh, and as always, Gabby Shayne was exceptionally gracious and looked maaahvelous! 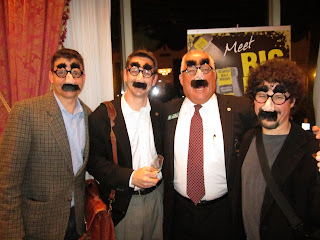 John: I went looking for the advertised Lagavulin 12, but learned it wasn’t there; instead I “settled for” the Lagavulin Distiller’s Edition.  And then, Ewan Morgan broke out the Glen Spey 21 year-old for us. So woody and delicious.  I also thoroughly enjoyed one or two of the SMWS drams on offer.  One was a Port Charlotte, and it was excellent.  I echo Bill’s love for Scapa and Usquaebach.  I was also more selective than last year–I didn’t try the beloved Laphroaig and only sipped one Ardmore–so I flew at higher altitude than Bill and with clearer skies.  I also enjoyed the lavish spread of food, by far the best food on offer at any of the whisky events we’ve tried.  And it was great, as always, seeing our good friend Joshua Hatton, President of the Jewish Single Malt Whisky Society, at the event.

Stephen:  Agreed on all fronts.  Alan, Gabby, and all people Shayne were their usual magnanimous and utterly hospitable selves.  And I should note that the food was also laid out better than last year’s event and was much more easily accessible.  The SMWS Port Charlotte was a highlight for me, too, as was revisiting the Loch Chaim with Jerry Zimmerman, and having a couple of Glenrothes with Iain McCallum (standing in for Ross Hendry at the time).   It was also great to meet Andrew Weir and to catch up with David Blackmore and once again try to slake my insatiable thirst for the Glenmo 18.  And I would be remiss if I didn’t mention Kim from VisitScotland and the amazing haberdashery she contributed to our photo spread. 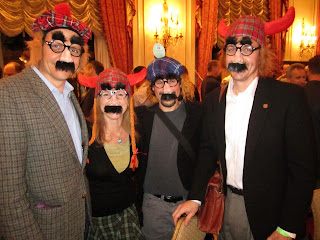 Bill:  Ah yes, the haberdashery: utterly unforgettable and a welcome addition to the Groucho Marx glasses.  A year ago, à la the X-Files, several hours vanished between the time we staggered out of the Taj and the time we arrived at our downscale imposterish hotel, which was one mile away. This time, although I beileve I recall everything correctly, at a certain point, as I usually do, I fell asleep. This time, though, as I usually don’t, I woke up in a chicken-wire mesh cage in Stephen’s ferret farm, with 15 or so of them curled up around me, including a few that had slithered inside my shirt and up my trouser legs. I need to work on my stamina.

Stephen:  You have a way with the little guys, Bill, you really do.  You should consider a sideline of ferret husbandry, if not herding.  I am still disappointed that the conference I attended in Scotland wasn’t more worthwhile, especially given that it covered both activities.  Such a great idea, such poor execution…

John:  Did they have any sessions on tying wee lassos for use in herding them?