[This is one Master of Malt sent us just to review for them (see our Disclaimer here).  Actually, that’s what they asked of us before.  They didn’t even ask that of us this time, but we thought we’d be good eggs and do it again anyway.] 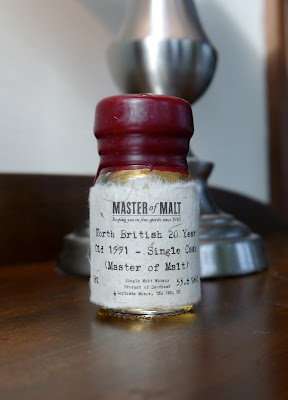 Tasting notes:
The nose is like turning on the air conditioning in a car after months of not using it.  What’s more, cotton candy is jammed in the vents.  There’s also a Styrofoam container on the passenger seat that squeaks open to reveal an uneaten order of jalapeno poppers topped with grated Good n Plenty’s.  All of this is to say that the nose is decidedly… curious.  In the mouth, my lips curl into a Billy Idol snarl.  The initial impressions are of an emetic made of household ingredients by eighth graders at a slumber party.  Maybe we have so attuned ourselves to the pleasures and vagaries of single malt Scotch that we no longer know how to handle grain whisky.  Or maybe we’re just snotty, pretentious gits (and if so, hooray! because that’s what we were going for).  But for us, this dram unsettles the bowels more than a drunken wedding toast by a best man who got after the vodka tonics (and at least one of the bridesmaids) earlier than anyone expected.  There is little finish here, but the reviewer regards this fact as a blessing.  In fact, the whisky evaporates more quickly than the opportunity to buy a bag of crap in a woot off.  Sooner than it ought to be possible, a hangover settles in like a coastal fog.  It is times like this—when the body passes its judgment before the mind reaches a conclusion—that you realize the wisdom of research that regards the stomach as a second brain.

Rating:
–On the scale of 19th Century endearments–
The North British 20 Yr 1991 Single Cask is Gustav Flaubert calling his dear friend, Louis Bouilhet, “my left testicle”–Broadminded fellows that we are at The Malt Impostor, we very much wish to give this the benefit of the doubt, but the stomach makes its disfavor known.  Besides, M. Bouilhet’s middle name is Hyacinthe.