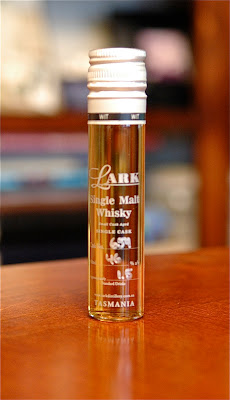 Tasting notes:
To call your dram the “Lark Distiller’s Selection, Cask #659” is to invite the question of the meaning of 659.  Have the good people at Lark gone through 658 prior permutations before settling on this expression as the epitome, the apogee, the ideal?  Has it been aged for 659 years?  Can a distinguished non-Impostor palate sense 659 distinct flavors and sensations?  Does it cost 659 Tasmanian monetary units?  Inquiring minds want to know.
But the questing intellect soon is derailed from these overly intellectual pursuits and immersed into the world of the senses.  The nose brings you to your Manhattan brownstone, perched on a stool by the kirschwasser steeping in a sourdough bread bowl situated on your tastefully amber-colored Corian™ counter.  You follow your nose out of the kitchen up to the locked attic, after passing the door and throwing open the skylights, you caress the gunstock of your Purdey & Sons double-barrelled shotgun, and breathe deep of wafting Birchwood Casey gun oil.  Locked and loaded lest an intruder disturb your luxurious lassitude, you return to the kitchen and tend to your dal-pan that is currently melting ghee.  The air is redolent with many spices from previous uses: Nutmeg? Allspice? Posh Spice? 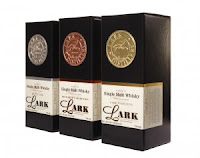 On the mouth, a stroll into your mahogany-panelled library, where lately you hosted Martin Scorsese and Brett Ratner. Your masseuse, Stieg, already has the table open and the supple leather has rarely looked so inviting.  As per your request, your biceps are rubbed with lemon oil–Stieg looks askance, stifles a remark–and the hands whirl, swirl, and spiral on your torso, tracing arabesques of splendor.
The finish is a one-note, a long note, the eddying of Swarovski crystals going down the Italian Carrara marble bath drain.  Who bathes in Swarovski crystals?  Evidently you do.


Rating:
–On the scale o flush, romantic pieces in the 20th century classical music canon–
The Lark Distiller’s Selection, Cask #659 is Ralph Vaughn Williams’ The Lark Ascending–Perhaps the Lark merely ascended from the number 658, or from the southern hemisphere to the northern, but here at the Malt Cave, we like to think that it ascended to the top of the Capitol Dome, and pooped on all the Congressional heads.

–Our thanks to Rob Imperial and the Marsalle Company for the sample–and to Brian Dvoret for leading us through a tasting of the whole Lark line on the Boston Whisky Cruise!