[This is one Master of Malt sent us just to review for them (see our Disclaimer here).  Actually, that’s what they asked of us before.  They didn’t even ask that of us this time, but we like Master of Malt, so we’re continuing the tradition.] 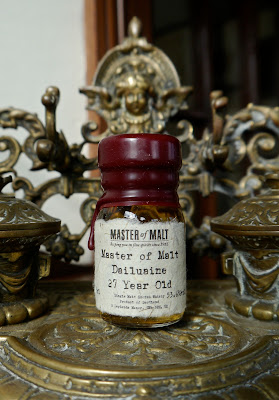 Tasting notes:
We’re aware that Diageo owns Dailuaine Distillery, and we’re aware that Dailuaine is a significant contributor to the blend that is Johnnie Walker.  Actually, we know its whole char-grilled history.  As fiery as the real story might be, we prefer to imagine Dailuaine is actually Welsh for “Dwayne” and that there are an inordinate number of thugs wandering around Cardiff engaged in regular hooliganism while bearing that moniker.
What does that have to do with the flavor profile of this particular expression, you say?  Well…ok, nothing.
On the nose this 27 year-old expression offers notes of a rich, dank field you traipse gaily through until you trip over a short but especially sturdy mushroom and land face down in the sweet wet soil, only to discover that the ground is sodden not with heavy rains but rather with bracing alcohol.  This heat on the nose focuses the attention nicely, preparing you for the especially smooth mouthfeel.
Then comes prickly, pointy, plucky spice, punctuated by pervasive, pulchritudinous phenol-derived synthetic vanillin.  The effect is immediate and actually a bit jarring:  you are transported from your fungal field faceplant to an immaculate dojo in which  you find yourself under the direction of a karate master who refuses to countenance Chuck Norris in any way, shape, or form.  This master—we’ll call him “Leonard”—already has you chewing on a glass bottle of vanilla extract in a wholly unorthodox but nonetheless enlightening exercise of tameshiwari.  “Be one with the Dailuaine on the mouth, young karateka.”  You do, you achieve zanshin, and Chuck Norris is none the wiser.
You follow your master’s direction, but you swallow and the mouth of the Dailuaine 27 Single Cask becomes the finish, and you find yourself once again transported.  The setting is nearly idyllic, but then you realize, around the same time you notice the elbow patches on your tweed jacket, that the Dailuaine’s finish is all too familiar.  It is a run-on sentence: it goes, and it goes on for quite a while, but you’re not happy about it.

Rating:
–On the scale of famous Dwaynes (or Duanes)–
The Dailuaine 27 Year Old 1983 Master of Malt Single Cask is Dwayne Johnson—He went from professional wrestler to starring in and as The Tooth Fairy to playing as “The Rock Obama.”  He ranks below Duane Allman (rated by Rolling Stone the second greatest guitarist of all time (behind Jimi Hendrix)), but well above postmodernist sculptor Duane Hanson.