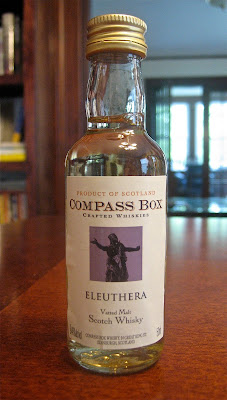 Tasting notes:
Okay.  You’re going to get the wrong impression.  I’m going to talk about fruit and spice and everything nice, and you’re going to think that this is a Robert Parker Fruit Bomb™ at best.  Or a silly perfume from a mall kiosk hoping to separate tweenage girls from their allowance money.  But the Eleuthera is neither of these things.  Let me explain.  First, it’s light and lemony on the nose.  A stick of Irish butter, curried orange, and dried apricots in a box of Jimmy Choo shoes, size eight, cradled by a finicky shoplifter.  Or a tin of mandarin oranges, quince, and persimmon purchased in a strange country that saw fit to can such things together.  We also found faint hints of peat in the background on the nose and even a sandalwood essence—think of a hemp vest worn by a hippie at a shop full of crystals.  We found all these things and more.  Truly, it was a horn o’ plenty but with

exotic fruits pouring out.  But it wasn’t a random assortment, but rather an exceptional balance.  The fruit and spice all pulls in the same direction, not at all like a tug-o-war set up across a condominium pool replayed on America’s Funniest Videos.  A really lovely finish but not so long lasting that you wouldn’t finish your glass quickly and seek to pour another.  In the beer world, they’d call this sessionable.  We call it delicious.

Rating:
–On the scale of fragments by the early Greek philosopher, Heraclitus–
The Compass Box Eleuthera is fr. 7 (DK): “If all things were turned to smoke, the nostrils would distinguish them.”–In such a world, pray that you are near the Eleuthera and far from Stephen after a session of IPAs from the Pacific North West.

–Our thanks to Robin Robinson from Compass Box for the mini and for the tip on where to find the full-sized bottles–at least this one last time!