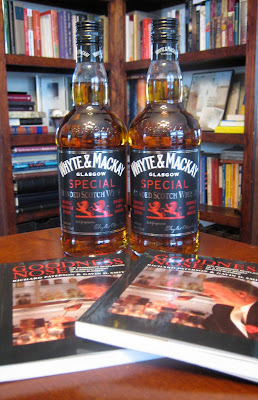 Tasting notes:
We received this whisky a while back now, along with a couple of copies of Richard Paterson’s book, Goodness Nose, all generously lavished upon us for having entered a caption contest on the Honorable Mr. Paterson’s blog.  If I remember correctly, there was a Lech Walesa reference.  Anywho, while the swag was put into the post fairly quickly, the post decided to chew on it and attempt for a time to digest it, and several months later, the box finally appeared in the MaltCave mailroom.  With bradypepsia not terribly dissimilar to that of the Scottish post on that occasion, here we are, several months later yet, with these our “tasting notes.”
Once John dusted off the tattered remains of the Derveni Papyrus that was his set of handwritten notes from our group tasting of the Whyte & Mackay, we realized that we had something as engrossing as an ancient commentary on a previously lost Orphic poem that had a lot of…um…references you couldn’t very well discuss in polite mixed company–or in polite company at all.  So close the doors, you uninitiated, and let’s get down to it.
On the nose, there’s sherry, but a mutated sherry:  Cheri, perhaps?  This cheri was used as a lubricant for a mechanical separator, then poured into a flex fuel vehicle.  In other words, the horsepower here has some kick.  The mouth is wine-like, with the tannins from the barrel playing prominently.  Fairly smooth and rather woody.  Here we also find the faintest hints of vodka distilled in a water heater by a potato-faced Russian.  A shortish finish, as after a 50-yard dash, but with less heart-thumping and no impulse to retch onto the track.  But then again, in this context, that’s preferable to the inordinately long finish attributed to Uranus in the poem.

—Our thanks to Craig McGill, Richard Paterson and the good people at Whyte & Mackay for the swag!  Slàinte!