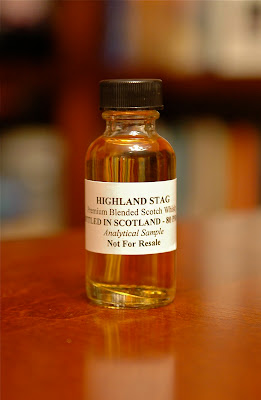 Tasting notes:
On the nose, this dram offers a delicate but definite distillate note, which some might confuse at first with that of a solvent, but with some concentration, other, more interesting notes come through.  Hot dogs fished out of the reservoir of a vendor’s rolling cart–only that reservoir is filled with steaming, perfectly sterile rubbing alcohol.  Institutional honey.  Lemon curd (not to be confused with “Lemond turd“) mixed with fake banana flavoring, or GMO fruit in which the mad scientists introduced turpentine genes.  Then on the mouth, tons of licorice dancing with Good-n-Plentys (in what is apparently–aside from the candy coating on one part of the population–a high school hurting for some of that tasty diversity stuff you find in all the better candy shops).  In broad strokes, the combo is like jumping off a cliff into the unknown, only to find that the air is actually licorice.  Overall, this dram is not complex, but it is surprisingly tasty and smooth:  there are hints of pencil shavings on the mouth–but really, really, good pencil shavings–perhaps mixed with a little pine resin by a mischievous sous chef to make a compote for pork chops to be served to overly snooty foodies [beware: link here perhaps more appropriate for… maltgonewild.com] In a lot of ways, and as odd as it is to say, this dram reminded us of a young Barbara Streisand:  it has an off-putting nose, but has a mouth (or in Barbara’s case, a voice) that’s so much better than you would have expected given the nose.  Oh, and the finish leaves a slight bitter taste in the mouth, much as did The Way We Were.  The three of us agreed that this is a real hangover dram (and that’s actually a good thing):  the nose will act as a slightly milder version of smelling salts, rousing one abruptly, but not as harshly as one could imagine, much like a huge, affectionate dog jumping on your chest and licking you awake (and let’s be honest:  if your’e waking up hungover, the process will not be wholly pleasant)–but then it offers you unexpected and uncomplicated tastiness that can serve as the hair of the dog that bit you (assuredly a different dog from the one who just awoke you with his exuberance and slobber).

Rating:
–On the scale of great movies for hangovers–
The Highland Stag is Monsters, Inc. (couldn’t go with Barbara here, just couldn’t)–Caveday is onto something here.  The original Toy Story is the better film overall, but with a more sophisticated story line, not to mention Billy Crystal and John Goodman, it’ll get you through in style.

*–Our thanks to Jerry Zimmerman and Aron Silverman for the samples!