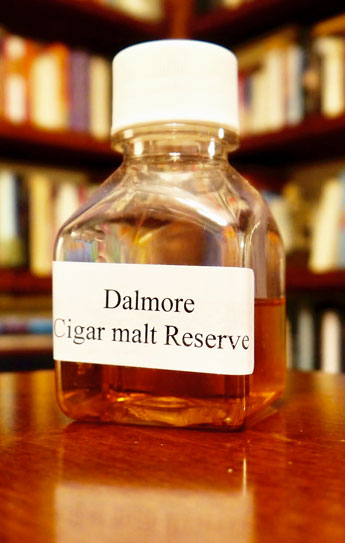 Tasting notes:
What this country needs is a good $5 glass of Cigar Malt Reserve.  Into the breach leaps Dalmore, et voila!, such a thing appears. (Assuming, that is, that one can find a glass of it at the local pub for $5.)  The nose is comfortingly Dalmore at first, and then an olfactory susurration wafting off Winston Churchill’s dinner jacket, slung over the macramé antimacassar draped on his black walnut and red velour overstuffed lounge chair.  Yes, as he dictates to his secretary in the nude, while reclining in his scented bath. (And thanks for THAT image, Stephen. Jesus.) [Stephen:  Not my fault Churchill was known to do that…]
And the dram has nice legs, pointedly unlike Winston Churchill’s.

The mouth is, unsurprisingly, like a mélange of 18 cigars smoked throughout a particularly contentious day at a Parliament function–unlike the 18 spliffs smoked during a particularly consensuous [John:  Bill! “consensuous” isn’t a word!  Hey, wait!  Did you take my…er…herbal remedy?] day at a Parliament Funkadelic concert. We (the Royal “We”) expected the mouth to explode, but it is more of a Prime Minister’s dram as opposed to a, say, Bill Clintonesque dram.  There are, somewhat unexpectedly, also grilled lemons drizzled in molasses, a tad carmelized, a tad smokey, and tad toddy or teddy.
The Maltpanel concluded that despite the elegant hints of tobacco, this dram would better compliment a cigar (“Oh, aren’t you the smokey one?!”) or complement a cigar than supplant a cigar.

–Our thanks to Laura Baddish and the good folks at Dalmore for the sample–and to the inimitable Richard Paterson, whom Bill and Stephen had the pleasure of meeting recently, for blending it!