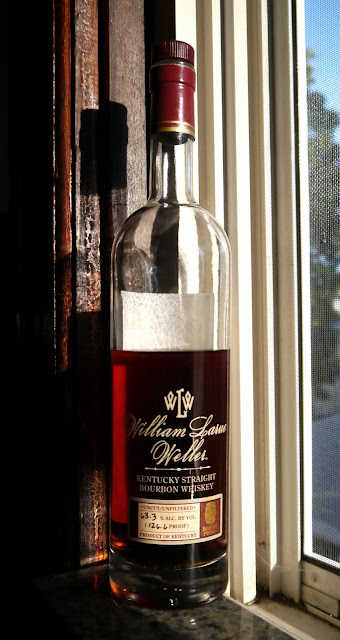 Tasting notes:
Wow, just look at it in the glass!  It’s as a dark as cordovan loafers after a sprint across a dew-moistened lacrosse field, or an acrylic cutting board after preparing chicken livers, or a urine sample after repeated punches to the kidney.  Man, oh man this looks great!  What’s that?  63.3% ABV? [/opens window so that the fumes don’t build up].  Swirling it, I’m not sure whether those are legs or liquification of the inner layers of the Glencairn glass.  I carefully lean over to nose it but my apprehension is repaid with soothing comfort.  Imagine replacing the animatronic dolls in Disney’s “It’s a Small World After All” ride with smiling emmer wheat sheaves holding out slices of Schwenkfelder saffron cake with caramel icing and a sea salt finish.  There’s corn here, too, and cherry tobacco.  But in this race wheat is the winner.  The reward is to sit under a window sill as a lemon chess pie cools wearing a garland of chipotle peppers.  Like the implacable, impeccable, flea-bitten ronin, Sanjuro, in Kurosawa’s Yojimbo, the William Larue Weller hooks its thumbs in its belt and starts kicking ass with but a glance of its eyes.  The finish is nothing if not a miniaturized Galatea brought to life on my tongue by Pygmalion prayers.  In grace she caresses my taste buds and swings on my uvula like a poorly-hung ceiling fan.  Do you take William Larue Weller to be your lawfully bourbon whiskey?  I do, I do, a thousand times, I do!

Rating:
–On the scale of Kurosawa’s Oscar-winning films–
The William Larue Weller is Rashomon–Four people drinking it will have four completely different impressions [Bill:  There are only three of us, John…], but all will agree that the Lord is dead, and the final result richly deserves international acclaim and multiple awards.