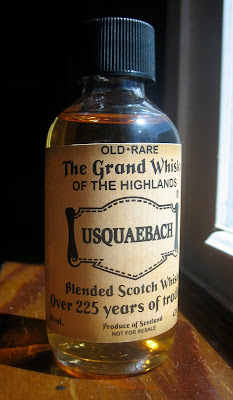 Tasting notes:
This extraordinary blend of 41 different Highland Scotch whiskies (and some Scotch grain whisky as well) is so complex, it resists being limited by a narrative structure.  This is not to be confused with failing to have enough structure or spirit or gumption to carry–or, in some cases, even warrant–a narrative structure (a problem we encounter with some lesser whiskies).  So deferring to the singularity of this stone-flagoned dram, I will eschew the sophisticated and hilarious narrative approach typical of this site and will instead jump into the stream of consciousness that this dram lets spill from the mind’s floodgates:
The nose is like that of an aged cheese, though not the kind that clears a room, thank God, alongside vine-ripened and smoked umami, if there were such a thing, presented on a cedar spit, or perhaps a spirit finished in a three year old smoked gouda butt, sporting a synthetic cork bung…oh my goodness I need some tissue paper for my mouth the way I’m salivating for this stuff now, which brings me to the mouth of the Usquaebach Old-Rare, like aged blackstrap molasses in a sherry butt with fireworks residue (or is that just Independence Day residue?) and maybe hints of fermented anise, now firing on my tongue hot and heavy like fireworks, like the best Pop Rocks you could possibly ever have, like the synapse firings of Francis Scott Key as he penned The Star Spangled Banner–if that had been a masterpiece instead of a mediocre song that’s hard to sing–as it progresses, this dram is an artist who can’t stop painting a masterpiece on your tongue–and he’s painting with a palette of joy and exquisite suffering and a little wasabi–and you wait for him to finish, but instead you get the finish, and it is much finish:  savory like a German dish of chicken with onion and lemon, a lemon soufflé you didn’t have to order ahead of time (and it’s even better than if you had), as it reaches full complexity, it makes you imagine Kentucky Cognac (and a good one), the finish provides mounting pleasure, like a Tesla arc slowing climbing up Jacob’s Ladder, only without all the existential and eternal implications, thank God.

–On the scale of individuals whose enduring fame I just don’t get–
The Usquaebach Old-Rare is Johann Gottlieb Fichte–a bridge from Kant to Hegel?  Really?  Why would you do that?  And why should that make you famous nearly forever (at least in some circles, which is all you can ask for in the eternal fame game)?  It seems a bridge too far–or maybe it’s just that it’s too much like Jacob’s Ladder, in that I don’t have any interest right now in going where it leads…

Our thanks to Noah Goldstein and Usquaebach for the sample!